The 8 Days Uganda Cultural Tour is one of the comprehensive cultural tours in Uganda that features takes you to various cultural sites and tribes of Uganda. The tour explores the Nakayima heritage tree in Mubende, the Amabere g’ Nnyinamwiru Caves which are breast like features believed to be dating back to the Bachwezi era, the Fort Portal Crater lake field, the Nshenyi Cultural village exploring the Banyankole Culture including great time with the beautiful Ankole long horned cattle, the Batwa heritage trail in Mgahinga, the 1520AD Eclipse monument, the Igongo Cultural Center and the Kampala Cultural tour exploring the National Museum and the cultural sites of the largest surviving Kingdom of Buganda including the Kasubi tombs, the lubiri Palace and the man-made Kabaka’s Lake.

Day 4 of the 8 Days Uganda Cultural Tour: Explore the Nshenyi village to gain an insight into the Banyankole Culture

Embark on the transfer to Fort Portal 300km about 5 hours’ drive from Kampala. You enjoy impressive views of Ugandan countryside including the inselbergs of Mubende, the en route towns and rural settlements before branching off at Mubende to connect to Nakayima tree. Named after Nakayima the wife of Ndahura a famous Muchwezi ruler, the Nakayima tree has lived here for many years past and the people believe it to possess the spirit of Nakayima. The traditionists converge here for pilgrimage and worship. You listen to a themed interpretation from the elderly guides at the site after which you proceed on the drive to Fort Portal. You settle for lunch and after you connect to the Amabere g’ Nyinamwiru caves. The Amabere g’ Nyinamwiru are breast like features that are believed to be belonging to Nyinamwiru the daughter of Bukuku who was a self-enthroned King of the Bachwezi. She was denied the opportunity to breastfeed her baby Ndahura as the father had been alerted that the child will take over his throne. The oozing whitish substance that flows down the breast like features is believed to be milk that continues to flow out of Nyinamwiru’s breasts. Retreat from this encounter and embark on the hike to the Fort Portal Crater Lake field where you traverse the challenging slopes of Kyeganywa hill surrounded by a range of crater lakes and crater hollows presenting one of the beautiful scenic sites in Uganda. The top of Kyeganywa hill offers the views of Rwenzori Mountains on a clear day. The various crater lakes and hollows are believed to have been dug by the Bachwezi and the presence of an abnormal footprint (a foot of a giant) on a rock near Lake Kigere makes the area an interesting heritage site to explore. Retreat from the activity and transfer back to Fort Portal for relaxation, dinner and overnight.

After breakfast, embark on the tour to the Royal Palace enjoying the impressively located hill of the Kingdom overlooking the Fort Portal town in the shadows of the mountains of the moon. The Palace features a great architectural building that is worth exploring. You tour the palace; explore the royal regalia and the interpretation of the King Coronation process. You retreat from the palace tour and transfer to Karambi Royal tombs to explore the tombs of the former Kings of Tooro including the founding father of the Kingdom – King Kaboyo. You listen to their great history and then retreat to the Fort Portal town for lunch. In the afternoon, you participate in the Batooro name giving ceremony which is a central practice among the Batooro as they give the pet names to their sons and daughters including Apuuli, Acaali, Akiiki, Araali among others. It is an exciting culture adventure that will see you get a pet name. 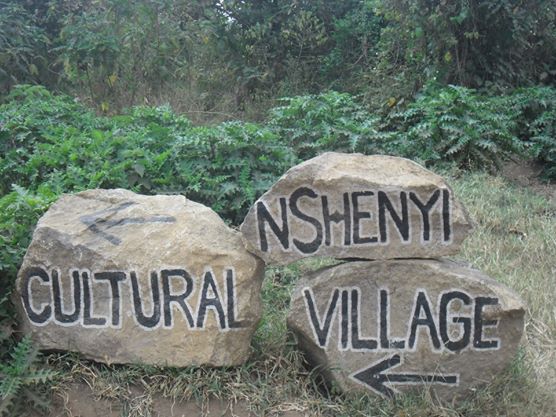 Embark on the transfer from Fort Portal to Nshenyi cultural in Ntungamo District. The drive will take you through impressive countryside landscapes exploring the settlement of the local people before arriving in Mbarara eventually Ntungamo. Nshenyi is 30 minutes’ drive from Ntungamo town and about 1 hour from Mbarara town. You arrive for relaxation, dinner and overnight.

Day 4 of the 8 Days Uganda Cultural Tour: Explore the Nshenyi village to gain an insight into the Banyankole Culture

You wake up early in the morning and spend the whole day exploring the traditions of the Banyankole Culture. You participate in the traditional hand milking of the long horned Ankole Cattle, explore the traditional cattle treatment process, the naming of the cows and how the calves know the names of their mothers and themselves, brushing the cows to remove dirt using the local brush called Enkuuyo, set out to the grazing field along with the herdsmen learning how to play the instruments like flute and traditional songs. You do the cattle watering at the locally made soil trough and then retreat home. You settle for traditional lunch which you can also participate in its preparation process and then attend to the craft making process, the impressive architectural huts’ tour and take a walk in the community to explore the way of life. You retire for relaxation, dinner and overnight.

Embark on the transfer to Mgahinga Gorilla National Park after breakfast driving through the impressive Kigezi Highlands dubbed the Switzerland of Africa and the scenic road of Kabale – Kisoro before being welcomed by the Virunga Volcanoes. You settle in the afternoon for relaxation, dinner and overnight. Embark on the Batwa Heritage trail exploration after breakfast. You connect to Mgahinga Park headquarters Ntebeko and get briefed before starting the trek to the forest following the Batwa trail in the company of Batwa guides detailing their great heritage embedded in their ancient home. You learn their wild honey harvesting means, the traditional medical plants, the tree houses, the hunting techniques, the edible roots and plants before arriving at Garama Cave which was the central place for their converging while still in the forest. The Batwa chief used to reside here. At cave, the Batwa women will treat you to impressive performances including their ancient songs. It is a moment of wonder and deep exploration into the Batwa culture that is at stake of fading away. The Batwa trail takes 6 – 7 hours after which you retire for relaxation at the lodge, dinner and overnight.

After breakfast, embark on the transfer back to Kampala 519km about 11 hours’ drive. You make a stop at the 1520AD eclipse monument overlooking the Igongo Cultural Center to explore the cultural attachment that is embedded in the total eclipse that took place in the 1520AD. The Cows of Ankole kingdom had been totally confiscated by King Olimi I of Bunyoro and the Banyankole were starving. And then a wonder happened when the King Olimi I was from raiding the cows of Rwanda and the total solar eclipse occurred when had reached Biharwe. He and his men thought that something terrible was going to happen to them and they abandoned the cows and run to Bunyoro. When the eclipse was over, the Banyankole found cows all over and they believed that they had been sent by God from heaven in response to their cries. Thus they called them “enduuga mwiiguru”. There is a monument that has been set to commemorate this occurrence. Your retreat from the activity and continue to Igongo Cultural Museum to tour the Erijukiro Museum which features collections of all tribes of south western Uganda dating back to their traditional era and settle for traditional lunch as well. You proceed on the drive and arrive in Kampala in the evening.

On this day you explore the culture and heritage of Kampala including the ancient Kingdom of Buganda. You tour the Kasubi tombs where four Kings of Buganda lay in rest and site has large traditional hut with magical architecture and is a world heritage site as proclaimed by UNESCO, tour the Lubiri palace the head of the Buganda Kingdom, the Bulange Parliament which an ancient parliament of Buganda that existed even before the coming of the Europeans. You explore the Kabaka’s Lake which is a manmade lake dug during the days of Kabaka Mwanga. You tour the Uganda National Museum which features a range of collections of Uganda and eventually walk around the craft markets to explore the art and craft of Ugandan people before marking the end of the tour.

Ndali Lodge is an Upmarket / Luxury accommodation establishment close to Kibale National Park. The Ndali lodge is about 5 hours’ drive from Kampala the Uganda’s capital city and the main starting point for the Uganda safaris.

Located on Buziga Hill overlooking the magical Lake Victoria, the Cassia Lodge is with in Kampala presenting midrange / standard accommodation for the Uganda safari undertakers.