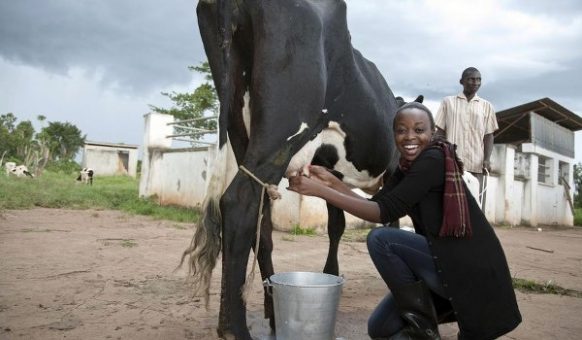 Uganda Agricultural Safaris or Uganda agricultural tours take you to the best Uganda farms both Crop growing and Animal raring. Our Agricultural Tours in Uganda feature farms that use among the world’s lowest amount of artificial fertilizers, at less than 2 percent (or 1kg/ha) of the already very low continent-wide average of 9kg/ha in Sub Saharan Africa.

The widespread lack of fertilizer use has been harnessed as a real opportunity to pursue organic forms of agricultural production, a policy direction widely embraced by Uganda.

Here is a list of our popular / sample Uganda Agro-Safaris BUT they can ALL be customised to suit your Africulture African Safari ineterests such as activites to do, time to travel, means of travel and safari budge Please find out about more Uganda Safaris

On top of Bukalasa, this Uganda tour also takes you to JESA Farm diary in Busunju which is the leading modern Diary Farm in Uganda. Read More

Uganda Agricultural Tours/ Uganda Agricultural Safaris usher you into Uganda, where 85% of the population was engaged in agriculture production, contributing to 42 percent of the national GDP and 80 percent of the exports earnings in 2005/06. As early as 1994 a few commercial companies began deliberately engaging in organic agriculture. At the same time in Uganda, there was a general movement in the agricultural sector towards developing sustainable agriculture as a means of improving people’s livelihoods.

By 2003, Uganda had the world’s 13th-largest land area under organic agriculture production and the most in Africa. By 2004, Uganda had around 185,000 ha of land under organic farming covering more than 2 percent of agricultural land, with 45,000 certified farmers. By 2007, 296,203 hectares of land were under organic agricultural production with 206,803 certified farmers. This constitutes an increase of 359 percent in terms of the number of farmers and 60 per cent in terms of acreage, respectively, from 2002 to 2007.

According to IFOAM, the global market for organic foods and drinks is estimated to be around US$50 billion and increased by 10- 20 percent annually between 2000 and 2007. This sub-sector provides a unique export opportunity for many developing countries, owing to the fact that 97 percent of the revenues are generated in the OCED countries, while 80 percent of the producers are found in developing countries of Africa, Asia, and Latin America.

As a significant producer of organic products, Uganda benefits from an important source of export earnings and revenue for farmers. Certified organic exports increased from US$3.7 million in 2003/4 to US$6.2 million in 2004-2005, before jumping to US$22.8 million in 2007/8. In terms of price premiums and income for farmers, studies commissioned by UNEP and UNCTAD indicate that in 2006 the farm-gate prices of organic pineapple, ginger, and vanilla were 300 percent, 185 percent, and 150 percent higher, respectively than conventional products.

Through organic farming, Uganda not only gains economically, but it also contributes to mitigating climate change, as GHG emissions per ha are estimated to be on average 64 percent lower than emissions from conventional farms. Various studies have shown that organic fields sequester 3–8 tonnes more carbon per ha than conventional agriculture.

Policy and systemic change to transform Uganda’s agricultural sector
On the policy side, in 2004 the Uganda Organic Standard was adopted, while in 2007, as part of the East African Community, Uganda adopted the regional standard, the East African Organic Products Standards (EAOPS) developed under a joint UNEP-UNCTAD initiative. In July 2009, the government released a Draft Uganda Organic Agriculture Policy. The draft policy describes the vision, mission, objectives, and strategies to support the development of organic agriculture as “one of the avenues for delivering self-sustaining growth as it provides mechanisms for individual farmers to improve productivity, add value and access markets which are keys to the achievement of the Poverty Eradication Action Plan objectives”.

The strategy put in place to implement the policy is based on interventions in nine policy areas: the promotion of organic agriculture as a complementary agricultural production system; the development of a system of standards, certification, and accreditation; the promotion of research, to enable technology development and dissemination; support to the development of local, regional and international markets for organic products; the generation of information, knowledge, and skills through education and training; the improvement of post-harvest handling practices, preservation, storage and value addition; the sustainable use of natural resources; and participation of the special interest groups such as women, youth, and the poor and vulnerable.

In sum, Uganda has taken an apparent liability – limited access to chemical inputs – and turned this into a comparative advantage by growing its organic agriculture base, generating revenue and income for smallholder farmers

Uganda is a member of East African Federation a nd is one of the countries on the African continent that are gifted by nature which prompted the British premier to declare it the pearl of Africa in 1908. It contains ten national parks that are well set to be encountered on Uganda safari.

The amazing experience starts with Lake Mburo National Park – the smallest savannah park in Uganda located along Masaka- Mbarara road in the south west of the country well known for its populations of Impala, Zebra and Eland more than any other park. Proceed to gorilla safari destination of Bwindi Impenetrable National Park the home of the endangered Mountain gorillas well known for gorilla tracking. Find More about Uganda Safari Parks/ Safari Attractions

From there a Uganda safari undertaker can then proceed to the north to encounter Queen Elizabeth National Park – the world biosphere reserve to view the tree climbing lions of Ishasha, the famous boat ride of Kazinga Channel and the game drive along the Kasenyi track. Proceed to the north to encounter the 1,509m Mt Ruwenzori famously Known as Mountains of the moon suitable for Adventure safaris especially mountain climbing.

The journey of your safari in Uganda still continues to Murchison falls National Park – the largest protected area in Uganda for the powerful Murchison falls, the big five, Giraffe and Nile River itself. Proceed far north east to Kidepo National Park – one most remaining wilderness parks in Africa to encounter endemics like Cheetah, Kavirondo bush baby, Ostrich among others plus the rewarding landscapes of the Karamoja region that will optimize your Uganda safari memories. Drive towards the south via Mount Elgon – the dormant Volcanic Mountain suitable for Hiking, viewing Sipi falls, the caves and paintings on the mountain side before announcing the end of your Uganda safari tour.

Kibale National Park Uganda-the major Chimpanzee trekking safari tours in Kibale forest national park destination in Uganda, is located in Kabarole district of western Uganda near Fort Portal and measures 776 sq km in size.It is elevate between 1110 meters to 1590 meters and has a national park since 1993. Read More about Kibale Forest National Park

Semuliki National Park Uganda is impeccable a Uganda safari spot located in the extreme west of Uganda in Bundibugyo district along geo-graphical coordinates 0o 44′- 00 53′ N – 290 57-30o 11’E. It is an eastern extension of the vast Ituri forest, and forms part of the forest continuum during the climatic upheavals of the Pleistocene period. It forms one of the richest areas for both flora and fauna in Africa particularly birds.. Read More about Semuliki National Park

A Uganda Safari that features the Rwenzori mountain climbing adventure provides a memorable and rewarding experience but in order to have a smooth flow it should be Well planned and every tour must be well prepared. The central hike circuit can take about six nights/seven days and then reaches an altitude of 14,000ft(4,267m) above the sea level. Read More about Rwenzori National Park

Kidepo National Park; The 1,442 square kilometres Kidepo Valley National Park lies in the rugged semi-arid karamoja province valleys. It is one of Uganda’s prime most remote but spectacular national parks that harbors scenery unsurpassed in any other park in East Africa. Many tourists that visit this park comment on the scenery and often promise and do come back to re-visit Kidepo, for according to them this tour cant not be any better any where. Read More about Kidepo National Park