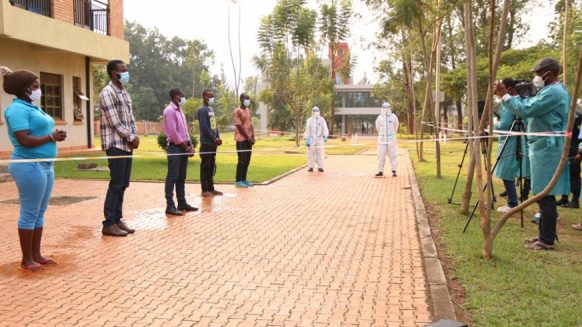 Police in the City of Kigali Rwanda arrested 17 people for allegedly violating government directives meant to prevent the spread of the novel Coronavirus (Covid-19). Those arrested include three who entered into the country from Uganda through an illegal border entry and two others, who had travelled to Kigali from Rusizi district in Rwanda.

All Rwanda Borders are closed and no one is allowed to go or leave Rusizi and Rubavu districts that are under total lockdown, as per the government directives, following the spike of cases from the western border districts. Only cargo vehicles are permitted to commute to or through these districts and borders.

Furthermore, 12 other people were arrested on Saturday for violating the curfew, with some of them found driving while drunk. Others were operating bars and those found drinking in these bars. Vedaste Uwabarengeye, who had travelled to Kigali from Rusizi, said that in the wee hours of June 13, he sneaked into Nyamasheke District from Rusizi, where he boarded a vehicle to Kigali.

“I was called by a friend, who told me that there was a job in Musanze District. I managed to get to Nyamasheke unnoticed, but I was arrested on arrival to Kigali before boarding another vehicle to Musanze,” Uwabarengeye said.

Ezra Niyonkuru, who had also travelled from Rusizi, was a taxi-moto operator in Kigali, who was in Rusizi when the country was put under lockdown in March. In the morning of June 13, Niyonkuru was helped by a cargo truck driver, who transported him and his motorcycle to Huye District.

It’s in Huye that Niyonkuru rode his motorcycle to Kigali, where he was identified and arrested on arrival. RNP spokesperson, CP John Bosco Kabera said that those who had travelled from Rusizi and Uganda have been isolated. He warned against undermining the directives and derailing national efforts against the pandemic.

“No one is immune to Covid-19, be where you are supposed to be and at the right time. For those in Rusizi and Rubavu, they are required to remain in their respective homes and communities until the government directs otherwise,” CP Kabera said. He advised Rwandans living out of the country to go through the legal border points so as to go through the medical screening for Coronavirus instead of being arrested for illegal cross-border as well as putting their lives and those of others at risk.

The spokesperson also sternly warned those who operate bars in this period or those who go there to drink as well as shops which have been turned into bars. Bars are still closed in this period of the pandemic.  He further urged the public to respect the curfew adding that 9 pm is the time to be at home but not going home.