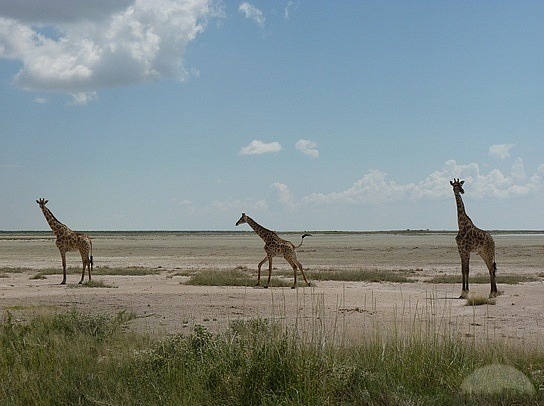 Standing as an expanse endorheic salt pan, the Etosha Pan is one the scenic Africa safari tour sites that comprise a section of the Kalahari Basin to the north of destination Namibia.

Stretching to 120km in length, the dry lake bed with its surroundings are within the borders of Etosha National Park – one of the Namibia’s largest wildlife parks and a popular destination for travellers on holiday Safaris in Namibia Africa. The Pan is majorly dry but can secure a thin layer of water following a heavy down pour. This water is very salted with a lot of mineral deposits on the pan surface which for considerable section of the year is dry mud coated with salt.

The Etosha which literally translates to a Great White Place is comprised of extensive mineral Pan marked with a surface that is white and greenish spread over 4,800km2. It is recorded to have been formed through the tectonic plate activity about ten (10) million years past. It is believed that about 16,000 years past, when the ice sheets were undergoing melting throughout the landmasses of the Northern Hemisphere, the phase of wet climate in the Southern Africa resulted into the filling of Etosha Lake. However, Etosha Pan apparently feature dry clay mud portioned into hexagonal shapes due to drying and cracking as always viewed on Africa adventure vacation safaris to Namibia.

It is believed that River Cunene brought water into the pan before the tectonic plate movements changed its course leading to the drying of the lake leaving behind the Salt Pan. Apparently, River Ekuma is the main source of lake water but very little water reaches the lake since water seeps into the river bed along its 250km course compromising the discharge amount.

The Etosha Pan is surrounded by dense mopane woodland that supports a range of elephants to the southern side of the lake. The salt pan hardly feature plant life apart from the blue-green algae and Sporobolus spicatus grasses that easily grow in the wet mud after rain. However, it can be noted that Etosha Pan becomes a lake of about 10cm deep in the rainy years and forms a rich breeding ground for flamingos and the great white pelicans.