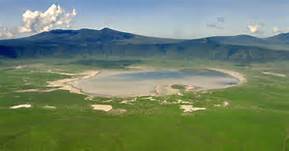 Standing as the World’s largest intact, inactive and unfilled volcanic caldera, the Ngorongoro Crater is one of the magical natural wonders explored on East Africa Safari tours.

The Ngorongoro Crater is noted to have been formed following the explosion and collapse of a huge volcano about two (2) – three (3) million years ago.  The crater rises to 610m in depth while the height estimates of the original volcano are between 4500 – 5800m. The Crater floor is recorded to stretch to 1,800m above sea level in elevation. This amazing natural feature was at one time voted among the Seven Natural Wonders on the Continent of Africa making is a must visit destination by travelers planning Africa Safaris to Tanzania.

The Crater floor features very beautiful extensive grassland along with bush land that supports a myriad of wild game.  It is estimated that about 25,000 large animals especially ungulates thrive in the Crater including the Black Rhinos, African Buffalo, Hippos, Common Eland, Grant’s Zebra, Blue wildebeest among others which makes it a popular game drive destination for travelers on Tanzania Safari tour. Actually Ngorongoro Crater features one of the dense concentrations of Maasai lions.

The highlands to the east of the crater feature high rainfall concentration between 800 – 1200mm and are marked with montane forest while the low lying areas of the west feature between 400 – 600mm marked with grassland and bushland.   The Olmoti Crater in the north is drained by Munge Stream and it forms the main water source that drains into the seasonal Lake Makat / Magadi at the center of the crater. Another important water source in the Ngorongoro Crater is Ngoitokitok Spring.

Exploring Ngorongoro Crater can be done as part of the wider Tanzania wildlife tour circuit that covers Manyara, Serengeti and Tarangire National Parks.