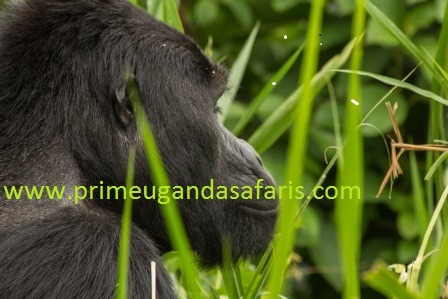 A re-loaded census aimed at ascertaining the total number of Mountain Gorillas protected in the famous Virunga Massif is planned to take place on September 2015 in the outstanding Virunga Mountains always visited on gorilla safari in Uganda and Rwanda. This was announced by the Greater Virunga Trans boundary Collaboration- GVTC.
The great massif which is composed of eight stunning volcanoes distributed in the three neighboring parks of Uganda’s Bwindi and Mgahinga Gorilla Parks, DR Congo’s gorilla park of Virunga National Park not forgetting the Rwanda’s gorilla park of Volcanoes is the only place left in the whole world where one can encounter the endangered species of the mountain gorillas on gorilla safaris in Uganda.
The last mountain gorillas census was carried out in the month of September 2011 and its results showed a 3.2% increase in Mountain gorilla population (to an estimated total of 880 in the wild) in the Greater Virunga and Bwindi with the other previous censuses having been carried out or conducted in the year 2006, year 2002 and the year 1997. The previous censuses were done with a five year interval.
This forth coming mountain gorilla census is aimed at estimating the current total number of Mountain gorillas protected and conserved in Uganda’s Bwindi’s Impenetrable and Mgahinga national park as well as other gorilla destinations of Virungas in DRC and Volcanoes national park in Rwanda which is the main Rwanda gorilla safari destination. The activity will also involve documenting information on illegal activities, the gorillas distribution and compilation of information on other mammals in the ecosystem.
The organizations directly involved in the planning and eventual implementation of the act – the Greater Virunga Trans boundary Collaborative clearly puts it that the method that will be used in this census will be the sweep method as well as fecal samples collected for generic analysis. In the sweep method, teams will walk through each established sector of the park in a zigzag way. The officers involved in the process of counting will be looking for fresh mountain gorilla trails till their nests are found and counted. The results are ascertained from the explored nests in the census process. Regarding the big apes, the studies affirm that sweeping would be more effective than the transect.
Though Mountain gorillas have few natural predators, they are the world’s most endangered apes due to the loss of natural habitat and forest clearing as always heard on gorilla trekking safaris in Uganda. They are also affected by the poachers’ snares while targeting duikers for wild meat and hunt for trade in wildlife. Human diseases are also a threat to gorillas since they can be directly transmitted.