About the African buffalo

Home » About the African buffalo 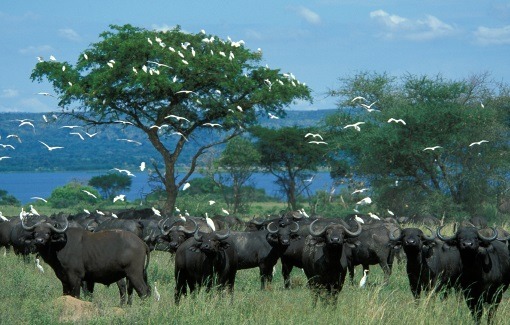 ifically known as Syncerus Caffer, the African Buffalo is a large bovine in Africa and not keenly related to a bit larger and Wild Asian Water Buffalo. Though its ancestry is still unclear, the Cape Buffalo also referred to as the Syncerus caffer caffer is the largest subspecies of African Buffalo and is widely spread to the parts south and Eastern Africa including Uganda. The Forest Buffalo scientifically referred to as Syncerus caffer nanus is the smallest of the Subspecies spread in the West and Central Africa. The Syncerus caffer brachyceros is spread in the West of Africa while the Syncerus caffer aequinoctialis is spread in the Central African savannahs.
The horns of a mature buffalo form its differentiating feature and have got fused bases that form a continuous bone shield regarded as the boss. The Buffaloes are generally regarded as a dangerous animal and it puts down over 200 people per year. The African Buffalo is not in any way related to the domestic cattle but is loosely connected to other larger bovines. Considering its dangerous nature which is unpredictable, the African buffalo has presented a challenge to any domestication move compared to the Asian Water Buffalo. It can be noted that apart from the human beings, the Cape Buffaloes have got few predators and besides lions, the Cape Buffaloes can defend themselves. Considered as part of the Big five animals, the Cape Buffalo presents a hunting trophy.
The African Buffalo is a strong animal Species that can reach a shoulder height of 1 to 1.7 m with a body length of 1.7 to 3.4 m. If matched with other large bovines, the African Buffalo possess a long and stocky body with a body length that exceeds that of the water buffalo which is considered to be taller and heavier. The African Buffalo has thick legs leading to short standing height. Its tail ranges from 70 to 110 cm in length. The Savannah dwelling Buffaloes weigh up in between 500 to 900 kg with the male Buffaloes always larger in size than the female counterparts extending to the extreme weight limit. The smaller forest Buffaloes range between 250 to 450 kg. The head of the Buffalo is normally carried low and its top is positioned below the back-line. The Buffalo’s front hooves are noted to be wider than the rear which is required to support the heavier weight that is in front of the body compared to the back.