About the hadada ibis

Home » About the hadada ibis 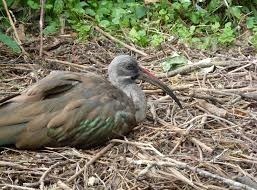 Scientifically referred to as Bostrychia hagedash, the hadada ibis that is greatly spread in the parts of Sub Saharan Africa belongs to the Animalia Kingdom, the Chordata Phylum, Aves Class, Pelecaniformes Order, Threskiornithidae Family, Bostrychia Genus and B. hagedash Species and stands as a tall outstanding bird that is impressive to explore on Uganda safaris.
The Hadada Ibis is a large bird that stretches to 76cm featuring a grey to brown ibis species and it features a narrow white stripe that is relatively horizontal across its cheeks. At times, this white stripe is referred to as a moustache despite the fact that it does not approach the corners of the mouth as viewed on birding safaris in Uganda.
The Hadada Ibis wing’s plumage feature iridescent purple shine while its legs are black along with a big bill that is grey-to-black in color featuring a red colored strip on its upper mandible. The upper toe surfaces feature a related coloring. The wings of Hadada Ibis are broad and powerful which enable it to have quick take offs and to maneuver past thick tree cover as explored on safari in Uganda.
The Hadada Ibis feature an extreme loud and distinct call flowing like “haa-haa-haa-de-dah” and this call forms the background for its naming. This form of a call is encountered when the birds are in flight, frightened or while communicating socially such as in the wee hours of the morning. The Hadada Ibis will produce a single loud call that flows like “haaaa” while roosting. In times of foraging, they keep in touch with a call that is a low growl relative to that of a young puppy.
Regarding habitat and the distribution, the Hadada Ibis are spread in the Sub Sahara of Africa thriving in open savannah, grasslands and wetlands, urban parks, green corridors, school fields along with expanse gardens. The Hadada Ibis thrives in a range of countries including Uganda, Sudan Birundi, Senegal, Ethipia, Tanzania, Gabon, Gambia, Democratic Republic of Congo, Cameroon, Somalia, Kenya, South Africa and Botswana.
The Hadada Ibis consumes majorly earth worms where it applies its long bill to negotiate soft soil and extract worms from there. The bird also consumes larger insects along with small lizards and spiders. The Hadada Ibis also enjoy consuming snails and would thus feed in the garden beds around the residential homes. The Hadada Ibis besides attracting visitors including those that plan safaris to Uganda, they are significant in golf and bowling fields where they help in consuming larvae of beetles and moths that feed on the grass roots.
Regarding Conservation, the Hadada Ibis are still spread widely and listed on the international Union Conservation of Nature red list as the Least Concern.