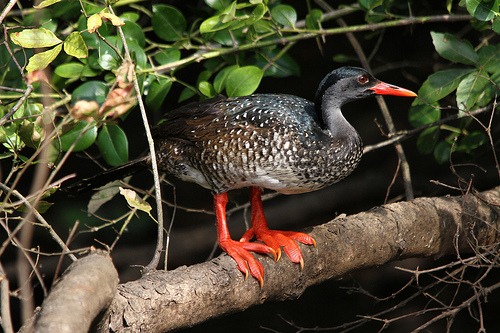 Also referred to as Podica senegalensis, African fin foot is listed among the most sought after Uganda Safari bird species and thrives greatly in the rivers and lake systems to the South of Sahara.

Noted to be an underwater dwelling bird species, the African Finfoot is denoted by lobed feet with bright color, long neck and sharp beak. Though the plumage tends to vary according to the race, the African fin foot is generally pale color underneath and has a dark top. The male tend to be darker compared to the females resembling the South America’s torrent duck as explored on birding safaris in Uganda.

The African Finfoot thrives in a range of habitats on the African continent including Rivers, Streams along with lakes all with good cover. Their habitat range would include; mangrove swamps, flooded forest, forest and wooded savannah. They are common in savannah woodland and forest areas with permanent Rivers with Syzygium guineese and would avoid fast flowing or stagnant water.

The diet of African finfoot includes aquatic invertebrates such as crustaceans, fish, amphibians, dragonflies, adults and larval mayflies and snails as at times viewed by birders on Uganda birding safaris and tours. This bird species are very opportunistic for they can extract prey directly on the water surface while their skills can as well enable them to forage on the banks of rivers.

African fin foots are remarkably secretive which makes them rare sights for birders and are always considered a big prize if encountered. Much of their time is spent in water though they can as well be seen on land.

The breeding of Africa Fin foot tend to differ by area but majorly occurs in the rainy season where nests are built using reeds and twigs above water on a fallen tree, flood debris or hanging tree limb.  They lay two (2) eggs and these are incubated primarily by the female.

Regarding their International Conservation status, it can be noted that though the African Fin foot is rare, it is widely spread. And the International Union for Conservation of Nature (IUCN) lists it as Least Concern on its red list.