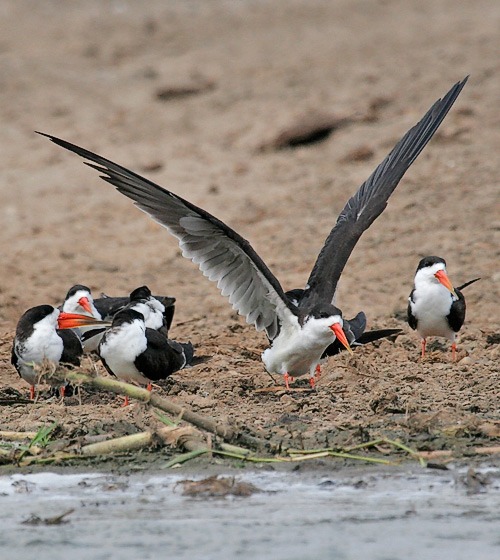 Scientifically referred to as Rynchops Flavirostris, the African skimmer is part of the skimmer family and noted to dwell in areas near close to water bodies including lakes, channels, Rivers and lagoons in the South of Sahara where they are explored on Africa birding safaris including birding safaris to Uganda.

African Skimmers are marked with black back, crown, hind neck and long wings while the forehead along with the remaining part of the body is white featuring long bright orange beak that is marked with a yellow tip.  The African skimmers have short white tail while the legs are shinning red as viewed during Uganda birding safaris and tours.  They have an average size of around 38cm in length. Their bill is considerably distinct with the lower mandible more extended than the upper mandible while the sideways are very flattened.

The African Skimmers are noted to fly in lines over the tranquil waters and would dip their lower mandible to extract food. The bird snaps its mouth shut after touching the fish. Their feeding time is at dusk and at dawn and feature good vision. The range of fish species consumed by African Skimmers include; Barbus, Tilapia, Hepsetus, Petrocephalus, Micralestes and Marcusenius.

Regarding reproduction, the African skimmers nest in colonies on big sandbanks and these colonies are comprised of fifty (50) pairs with each pair laying 2 – 3 eggs in a sand scrape. At times, the colonies of African Skimmers are intermixed of other birds that nest in the sand banks including; white-fronted plover, pied avocet and collared pratincole.

African Skimmers are listed as near threatened under the IUCN red list with global population 15,000 – 25,000 individuals. They are migrant species but are noted to be intra-African migrants moving to South Africa when the river water volume reduces at the onset of dry season in the months of April through June and then return to the northwards during the rainy season when the water volumes begin to rise in the months of November through to February.

In Uganda, the African skimmers can be explored along the Kazinga Channel while on a safari in Uganda.