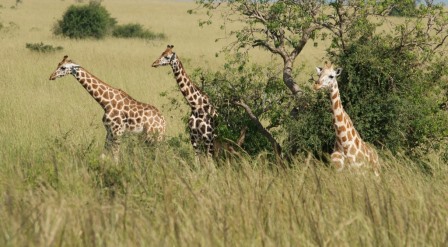 ROTHSCHILD GIRAFFES are  one of the most iconic species encountered on Uganda safaris and tours. This is the tallest mammal in the whole world as they are both wonderful and weird with its long neck and legs long eye lashes, striking coat patterns and an amazing calm demeanor.

However as we pride in having these beautiful creatures, we also need to reflect on the fact that the gentle giants are on verge of disappearing in Africa and taking up a safari to Uganda is a lifetime chance to learn more about these species!

Giraffe comes from a scientific name giraffa Camelopardalis which is a Latin name. It was derived from an English word which was used to refer to giraffes as camelopard that is a camel and leopard which the giraffe resembles.

One of the unknown facts on these fascinating animals is that there are 9 species of giraffes in Africa and these inhabit different countries on this continent. However genetic evidence shows that some may not be different from others as others are distinct species on their own. However the Rothschild giraffe is a stunning species over the others due to its amazing coat patterns that give an African sunlight reflection when you have a glimpse on them.

The Rothschild’s giraffe is related to an okapi a horse like animal found in the tropical rain forests of Congo. It has a body shape that is similar to that of a giraffe but with a shorter neck. Both of them have unusual ossicones, specialized teeth, tongue and a four chambered stomach.

Today there are few remaining giraffes in Africa and their numbers have dropped by about 40% over the recent years with giraffes being extinct in 7 African countries. A report dubbed red list giraffe by IUCN listed concern on the Rothschild giraffe that is currently listed as “endangered”.

The Rothschild giraffe live in social stationary groups which are referred to as towers and their movements are known as journeys. Their social system is referred to as a fission-fusion type of system which means that the composition of the group changes in hours or days. A group is composed  females that are known as cows and their young ones whereas male also known as bulls are found in the bachelor herds. They join females especially when the females are in oestrus and need males.

One of the surprising characters on a giraffe is the long neck and with this neck, this God made wonder has got the same number of vertebrate in the neck just like human beings and the rest of the mammals. They have seven cervical bones though each is 25cm long which helps it in feeding, vigilance, fighting also known as ‘necking’ that is common in males where they repeatedly head butt their rivals.

The giraffe horns are known as “ossicones” with both females and males having them.  They emerge from the ossified cartilage a tissue in the giraffe head.  All the giraffes are born with their hors though they lie flat and later fuse up the skull as the giraffe grows. The female ossicones are tufted whereas male ones have thicker horns that become bald on top due to frequent necking. These add an extra weight to the head of the giraffe as its age goes up and helps to take heavier blows during necking.

The Rothschild has a small heart only weighing about 11kg compared to its large size. The Rothschild giraffe has an extreme high blood pressure more than that found in human beings.

Just like man’s fingerprints, Rothschild giraffes have different coat pattern as male’s coats go darker with age and these coats are used for camouflage and thermo regulation. This can be viewed on wildlife safaris and tours in Uganda.

Although the Rothschild giraffe is known to be quiet, it has also been heard using various sounds especially during courtship where bulls usually emit loud coughs and females call by bellowing especially while calling their young ones.  The young ones call by snorts, mooing, mewing and bleats.

If interested in exploring this wildlife species, endeavor to include Murchison Falls National Park, Lake Mburo National Park and Kidepo Valley National Park while developing a travel plan for a safari to Uganda.