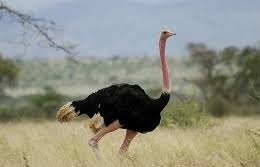 Unique in its look, with a tall neck and long strong legs that permit it to rise higher than “what man refers to as tall”, the ostrich is the world’s largest living egg laying species of birds. With the ability to accelerate to speeds superseding 43 miles (70 kilometers) per hour endorsed by its long hardcore legs that make strides of up to 10 feet and a record 16 feet for a few genius sprinters, the ostrich reigns as one of the world’s most sought-after bird species, which can fortunately be seen while on a Safari in Uganda. This bird would have the world’s fastest man, Usain Bolt, gasping for air.
These interesting birds lay the biggest eggs known of any living bird in the world today, another record that clads it famously in a “Suit and Tie”. Their double clawed solid legs are so strong that with only one kick, their masters the humans, and the majestic “raja of the jungle” the Lion will breathe their last.
Unlike the majority of other birds in the world, the ostrich is tracked on land because of its flightless nature. How nice it is not to worry about seeing it for a few seconds and then off it flies, which is prospective of many other bird species! While on a Uganda Safari, binoculars can take a nap while tourists use their naked-eyes to clearly view this gigantic bird even from a couple of meters away.
In pursuit of the ostrich, your Safari to Uganda will lead you the North Eastern corner of Uganda in the district of Kaabong, in Kidepo Valley National Park, the only environment that perfectly supports the natural existence of the ostrich. For those on a tight schedule, controlled ostriches have been trans-located to a place closer to you, just a few kilometers from Entebbe International Airport, at the Uganda Wildlife Education Center.
While on your Uganda Safaris and Tours, make it an initiative to keep your camera standby because anytime you may be served to free entertainment by an unbelievable dance done by the brightly decorated male ostrich as he toils to attract the females for coupling. This romantic dance is one to cloud your Safari in Uganda with tears of delight. As is its size, the ostrich has a great-deal more of things for you to see.
Uganda safaris/Uganda safari News
Prime Uganda safaris & Tours Ltd