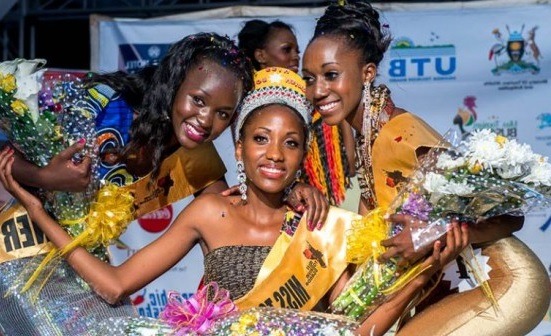 Uganda is not only gifted by nature but also her great people that are beautiful and hospitable which makes travellers undertaking safaris in Uganda to feel at home. These people hail from different cultures that inhabit various regions of the country with unique patterns and settings which have got the potential to augment traditional products like gorilla trekking safaris, wildlife safaris and Chimpanzee safaris. And, since thriving in this contemporary world is enhanced by tapping any opportunity that comes by, Uganda has ushered herself to tap the potential of her people to increase safaris to Uganda.
In this regard, the annual Miss Tourism Competitions were invented and for this year, a Kyambogo University student and Central region representative, Patricia Babirye Ntale has taken up the mantle as Miss Tourism Uganda 2014/2015 at the recently concluded beauty contest at Kampala Serena Hotel – a center which also provides an ideal accommodation for upmarket Uganda safari undertakers.
The contest which has run across the country with the foundations based at regional levels has seen a number of regional representatives qualify to Kampala for the National Miss Tourism contest. The contestants were passed through training exercise that boasted their knowledge about tourism in Uganda at Uganda Wildlife Education Center in Entebbe. It was on Friday 17th October, 2014 when 20 year old Patricia Babirye Ntale demonstrated her competence when she answered all the questions at the brink of an eye proving that she had all the information about Uganda safari products at her figure tips. As a result, she was crowned Miss Tourism Uganda with Busoga’s Roberta Jean-Marie Magooba coming in second position and Gulu’s Norah Atim in the third position. The winner is meant to popularize Uganda as a tourism destination both domestically and internationally. She will also represent Uganda at the World Miss Tourism to be held in December in Malysia. The first runner up will participate in the travel exhibition in London while the second runner up will participate the famous International Trade fair in Berlin in next year’s February.
Uganda safaris/Uganda safari News
Prime Uganda safaris & Tours Ltd safari News.