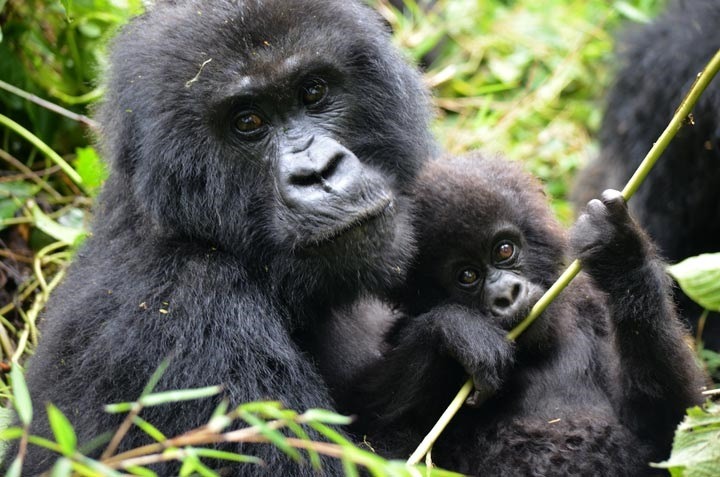 Mountain gorillas are the most endangered wildlife species in the world and according to the current research only 880 individual gorillas are left in the world and among these, 400 are protected in Uganda’s safari destination of Bwindi Impenetrable National Park and the other remaining half is housed in the stunning Virunga massifs which are shared by three national parks of Volcanoes national park in Rwanda, Virunga national park of Congo and Mgahinga Gorilla park in Congo.
Not so long, the word endangered apes where not popularly known to the west world countries not until 1902 when the Captain Von Berenge together with his friend when on hiking Safari to Rwanda’s Sabinyo mountain- oldest Virunga Volcano by chance encountered a group of the mountain gorillas feeding on the top of the Volcano and they shot two of the mountain gorillas. However they managed to secure only one whom they carried for further research. The Mountain gorilla they had captured was a young –male mountain gorilla which was approximated to be five years old.
Before mountain gorillas where officially known to people, most people in the world used to depend on imaginative thoughts of the Tarzan movies and King Kong and by then, there were no gorilla trekking safaris to Rwanda or Uganda .The world only received light about gorillas when the precious apes’ skin of the Young mountain gorilla which was captured in Rwanda was taken to Berlin for testing and further research. After the research result proving that the animal species was mountain gorillas, it created demand for more gorilla trekking safaris to Rwanda because most researchers where interested in proving and carrying out more research.
The research report and gorilla news that were published by the researchers in Berlin confirming that mountain Gorillas where surviving in the High and colder natural environment of volcanoes national park in Rwanda and forested areas of Bwindi Impenetrable National Park surprised many people because no one had sought that Mountain gorillas could stay in this high altitude and cold areas in Africa. Hence this inspired many travelers from different parts of the world to undertake gorilla safari tours to Rwanda to prove whether it was true that gorilla’s live in these kind of environment.
Rwanda Safaris/Rwanda Safari News
Prime Uganda Safaris and Tours Ltd