THE BAGISU SET TO ESTABLISH A HUGE IMBALU CENTRE

Home » THE BAGISU SET TO ESTABLISH A HUGE IMBALU CENTRE 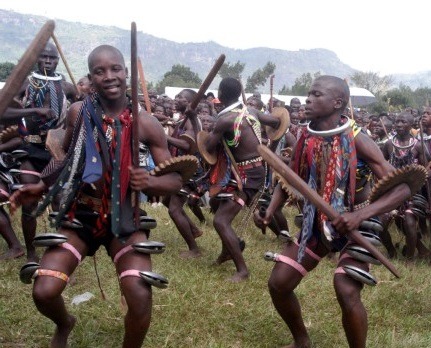 The Bamasaba Cultural Institution in conjunction with the Uganda Tourism Board – the main marketing body of Uganda Safari tour products has unleashed the plans to upgrade the Mutoto Cultural Site where the biennial circumcision rituals are conducted into a tourism center.

Mutoto Cultural Ground is a notable location within the Masaba land where the initiation of boys to men locally known as Imbalu is noted to have been first conducted by the Bagishu in the Elgon region which apparently feature five (5) districts making the place of a historical significance to the local people and a point of interest among travelers on Safari in Uganda.

Spread in the districts of Manafwa, Mbale, Bududa, Bulambuli and Sironko to the East of Uganda basically on the foothills of Mount Elgon which they consider to be the embodiment of their founding father Masaba, the Bamasaba conduct the Imbalu ceremony in every even year where the young boys are circumcised in a traditional style as a way of initiating them to manhood.

The Mutoto Cultural Ground was unveiled at the official launch of the 2016 Imbalu festival by the Inzu Ya Masaba Cultural Leaders. The ritual which have been at the center of the Bagishu Culture for over 200 years and not yet ready to compromise by all means would require a well developed ground where its uniqueness and strength can be demonstrated to attract the Uganda cultural tour undertakers and the tourism revenues to the region.

Fortunately, this comes at a time when the government has already picked interest in the Imbalu festival which it has elevated into a carnival and listed among the tour products that can be explored while on safaris and tours in Uganda. The government reiterated its position on encouraging cultural and heritage conservation in a speech read by the 2nd Deputy Prime Minister Kirunda Kivenjinja on behalf of the President.