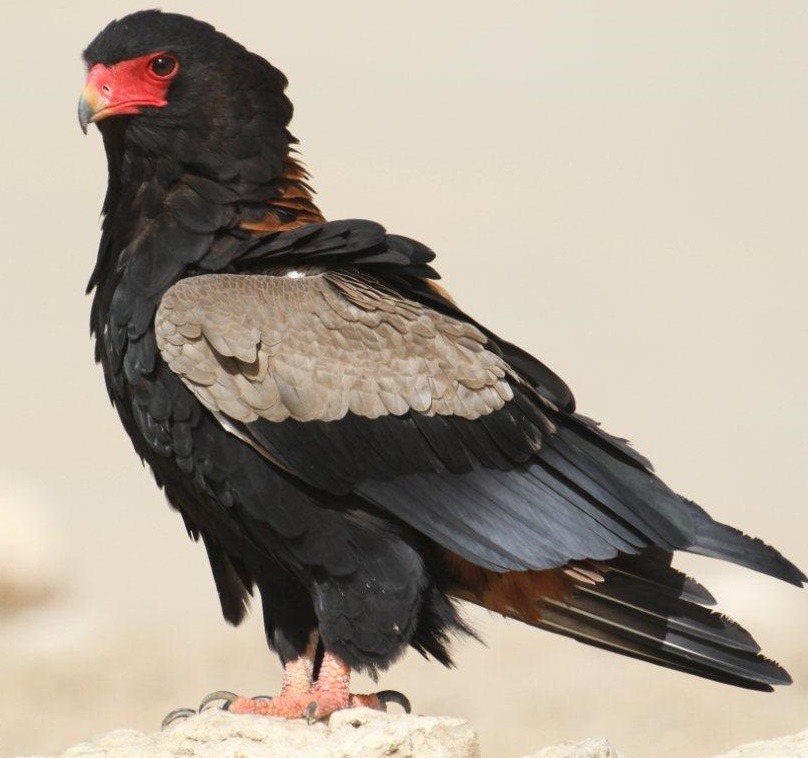 Scientifically referred to as Terathopius ecaudatus, the Bateleur is a medium-sized eagle belonging to the Accipitridae family closely related to snake eagles. It is recorded to be the only member of Terathopius genus and is limited in small parts of Arabia and various countries of Africa including Uganda where it is explored on Uganda birding safaris and tours.

An average mature Bateleur stretches from 55 – 70cm in length along with a wing span of 186cm. The weight is between 2 – 2.6kg among adult birds. The Bateleur feature short tail and is colourful as always viewed on birding safaris in Uganda. The short tail makes the legs to protrude while in flight.

Bateleur is noted to be sexually dimorphic with both adults featuring black plumage but with red facial skin, legs and the bill.  The female features secondary tawny feathers and at times, with white mantle.

The Bateleur is a diurnal bird species which undertakes the hunting in a range of 250m2 territory in a day. They do hunt and scavenge with preference to birds like sandgrouse and pigeons though it can as well attack small mammals along with carrion.

Breeding among the Bateleur normally occurs in December through to March where a well-concealed nest is constructed in trees laying one egg that is incubated by the female for a range of 42 – 43 days. The Bateleurs do the pairing for life and utilize the same nest for a range of years as often encountered by birders on Uganda Safari.

Regarding distribution and habitat, the Bateur thrives in open savannah and woodland in the sub Saharan Africa and to the south west of Arabia.  It is listed as Near Threatened on the red list of the International Union for Conservation of Nature.