THE BEAUTY OF THE ALBERTINE RIFT – UGANDA SAFARI NEWS

Home » THE BEAUTY OF THE ALBERTINE RIFT – UGANDA SAFARI NEWS 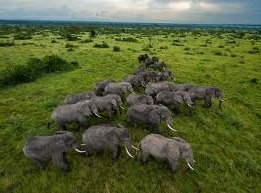 Stretching from Red sea to the northern lands of Malawi, the great East African Rift Valley is one of those geographical wonders that have ever shaped the continental lands of Africa. The western arm of this East African rift valley commonly referred to as the Albertine rift deriving its name from the long stretching Lake Albert that mark the northern tip of this natural feature, is a great landscape that has inspired a range of world travelers to undertake safari tours to Uganda in the process of encountering it.
Stretching from the north western part of Uganda running to the south with the Uganda boarder stopping within Mgahinga National Park that protect the landscapes of the three Virunga volcanoes namely Gahinga, Sabyinyo and Muhabura, the Albertine rift has for long become a center of researchers and leisure Uganda safari tour undertakes.
The beauty of the Albertine rift cannot be gauged on a single feature as there are wide range of features that make it a must visit destination by travellers on Uganda safaris and tours. Ranging from the snowcapped towering Rwenzori mountains also known as the legendary mountains of the moon as described by Ptolemy in 150 AD to the flat savannah landscapes of Queen Elizabeth National Park and Semliki Valley, the magnificent escarpments of Butiaba, Kichwanba and Kyambura that mark its boundaries, the series of lakes that fill the troughs that were left during its formation process including Albert, Edward, George among others, the pre-historic mature rain forest of Maramagambo, Kalinzu, Echuya and Bwindi Impenetrable with their great counts of biodiversity which was shielded from the last ice age enabling the rift to have one of the great endemic species globally including the world’s critically endangered mountain gorillas that form the ground for gorilla trekking safari tours in Uganda, Chimpanzees that form the ground for chimpanzee trekking safaris in Uganda and enormous wild game that form the ground for wildlife safari tours in Uganda and countless birds moist of which are endemic and are heavily sought after thus prompting world birders to plan safari tours to Uganda.
The Albertine rift has experienced various earth process including forces of volcanism and faulting that resulted into the formation of great scenic features including the range of explosion craters that mark the region of western Uganda offering magical scenic views to travelers on safari tour in Uganda. The amalgamation of these generates ultimate Uganda safari memories.
Uganda safaris/Uganda safari News
Prime Uganda safaris & Tours Ltd