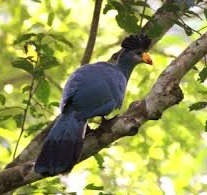 For many decades, big game has been the dominant attraction drawing visitors to Uganda and it still is. However in recent years, there has been an increase in the number of people under taking bird watching safaris to Uganda. . A potential for bird watching safari tours in Uganda was established in the late 19th Century by Sir Frederick Jackson, former Governor of the Ugandan Protectorate who nick named Uganda as a “Hidden Eden and a wonderland for birds”.
Today, bird watching is done in different destinations and among the many bird watching areas involves Mabira forest located in Buikwe District, between Lugazi and Jinja along the highway connecting Kampala to eastern part of Uganda. Mabira Forest is the only largest rain forests left in Central Uganda covering an  estimated area of about 306 square kilometers.
With an estimated total of 315 species of birds including the endangered species like the Nahan’s francolin, Yellow and grey long bills, Tit Hylia, Purple-throated cuckoo shrikes, Illadopsises, Jameson’s wattle eyes, Mabira forest is a true birding destination where visitors on Uganda safaris can enjoy bird watching activities. The forest is endowed with 46% of Uganda’s forest
The interesting bird species in the forest are enjoyed through forest walks through the designed forest trails. During the forest walk, visitors can enjoy the sights and views of different bird species such as Nathan’s francolin, purple-throated cuckoo shrike, paradise fly catcher, and sooty boubou to mention but few.
The forest has well organized trails that include the Red-tailed Monkey, Turaco and the Buttress trails .These are easily by bird lovers on safaris to Uganda to look for Nahan’s Francolin bird species which is an IUCN Red list’ endangered species, White-spotted Flufftail, Afep Pigeon Cassin’s Hawk-eagle, Grey Parrot, Black-shouldered Nightjar as well as Dusky Long-tailed Cuckoo, Black-shouldered Nightjar and Sabine’s Spinetail, among other prominent bird species.
In addition to the birds, one can also encounter different species such as butterflies, different tree species as well as unique primate species such as vertvets, gre-cheeked mangabeys as red tailed monkeys among others.
Uganda Safaris /Uganda Safari News
Prime Uganda Safaris &Tours Ltd