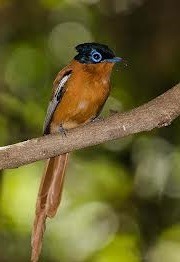 Uganda is endowed with a range of tropical forests with great counts of bio diversity including the impressive bird life that is always encountered on safaris in Uganda. Budongo Forest Reserve positioned in the north west of Uganda is one the largest mature surviving tracts of forests that do not have a position in Uganda but also in East Africa at large.
Stretching to cover a geographical coverage of 42800 hectares, Budongo Forest has got a combination of savannah and woodland vegetation alongside the verdant of semi deciduous forests which has made it a darling for birds. The Rivers Waisoke and Bubwa also traverse the forested landscape of Budongo and can be seen while on Uganda safaris and tours.
Budongo Forest Reserve has got 360 species of birds along with 290 species of butterflies and 130 species of moths making it a diverse destination that should be included in the list of what to encounter while planning safaris to Uganda.
Undertaking birding safaris to Budongo Forest exposes you to arrange of birds. some of which are endemic such as the Illadopsis puveli and Yellow-footed flycatcher. Others include; Black-eared ground thrush, Brown twinspot, Blue-breasted kingfisher, Cameroon sombre greenbul, Cassin’s spinetail, Cassin’s hawk eagle, Chestnut-capped flycatcher, Crested guineafowl, Crowned eagle, Chocolate-backed kingfisher, Dwarf kingfisher, Ituri batis, Grey-headed sunbird, Lemon-bellied crombec, Mountain greenbul, Little green sunbird, Pygmy crake, Sabine’s spinetail, White-thighed hornbill, White spotted flufftail and Yellow crested woodpecker mong others.
Uganda Safaris / Uganda Safari News
Prime Uganda Safaris and Tours Ltd