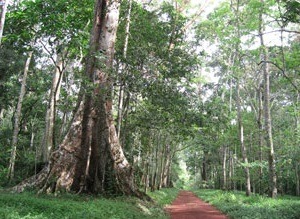 The Budongo Forest reserve is an Eco-tourism site in Uganda and it’s included in the list of places in Uganda where birders who are in their bird watching safaris in Uganda can easily enjoy birding in Uganda. The wonderful birding destination in Uganda is positioned on the nice looking escarpments located in the northeast direction of the prominent Lake Albert.
Budongo forest covers an area of 42800 hectares of land and the forest is composed of the wood land and savanna vegetation characterized with semi deciduous verdant forests as well as being located in rolling landscape. The nature forest is supplied water by the three small rivers surrounding the forests and among these includes Sonso, river, River Waisoke and also Bubwa River. The existence of these rivers has favored the survival of different bird species which stay in the forest and sometime enter the rivers to take water and are always encountered by travellers on Uganda safaris.
The best birding destination is Budongo forest because the forest has different bird species which are unique and endemic to the forest .Visitor’s tour to this area will reward him or her by having chance to view most of the birds among the total of 360 recorded birds in this area. Besides birds, the forest is also endowed with a total of 290 species of butter flies as well as 130 species of moths, all which can be found by Uganda safari undertakes while in this forest.
Safaris in Uganda planned for bird watching avail birders with the chance of watching the special two species of birds which are endemic to only the Budongo forest and hence such types of birds cannot be watched in some other parts in Africa a part from Budongo in East Africa. According to the Ugandan ranking the forest come second as best birding destination after the mighty Semliki National Park located in western part of Uganda. One of the best reasons as to why Budongo forest is ranked among the best birding destination is that the forest is blessed with the rare species which cannot be seen in other forests in Uganda and among these species include Ceratogymna fistulator, Zoothers camaronensis as well as, Neafrapus cassini and Batis ituriensis
Being diversified forests tourists under taking a safari in Uganda can also enjoy the different five main forests that make up the Budongo forest and these include Cynometra-mixed, swamp-forest, as well as Cynometra. The existence of various forests offer guests chance to carry out other activities such as identifying tree species, tracking some primates found in the forest.
Uganda Safaris / Uganda Safari News
Prime Uganda Safaris and Tours Ltd