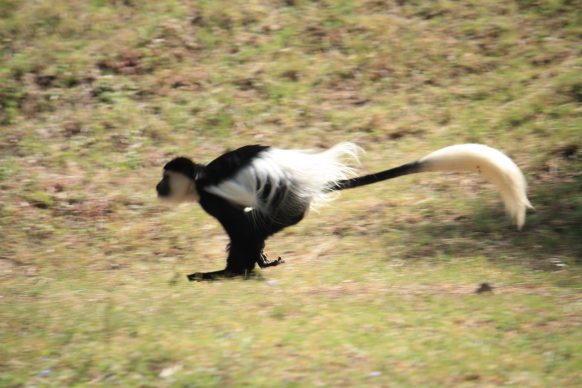 The Black and White Colobus Monkeys are descendants of Old World Monkeys belonging to the Colobus genus native to the continental lands of Africa where they are explored on Africa Safaris including Rwanda Safaris and Tours.

The Black and white colobus Monkey gets its colobus name from its lack of thumbs. They are marked with beautiful black fur that contrasts with extended white mantle, bushy tail, whiskers along with beard around the face as viewed on Safaris and Tours in Rwanda.

The Black and White Colobus Monkeys consumes leaves, flowers, twigs and fruits. They live in habitats such as primary and secondary forests, wooded grasslands and riverine forests. They prefer to thrive more in higher density logged forests compared to primary forests.  They have a gestation period of six (6) months and the new born Colobus monkeys are purely white while cases of allomothering are recorded among these species meaning that the young one is cared by the entire troop other than the biological mother alone.

The Black and White colobus monkeys feature sloppy habits of eating which makes them significant in terms of seed dispersal. They feature a weight of 15 – 30lb and 30inches in size. The predators of the Black and White Colobus Monkeys include humans, large eagles and Leopards.

Nyungwe Forest National Park has the largest troop of Black and White Colobus Monkeys in Africa with over 400 individuals and it is very fascinating to explore during the Colobus monkey tracking activity on Rwanda Safari.  In Uganda, they can be viewed in Kibale National Park, Semuliki National Park and Queen Elizabeth National Park among others. They are noted among the popular primate species sought after on wildlife safaris in Uganda.