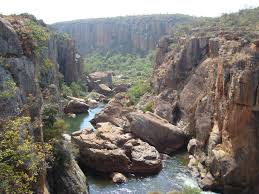 Positioned in Mpumalanga to the north of Drakensberg escarpment, Blyde River Canyon is one of the fascinating Africa Safari tour sites in the Republic of South Africa. Stretching to 25km in length, the Blyde River Canyon is indeed among the impressive scenic places of Africa. The Canyon is marked by red sandstone and the canyon’s highest point is Mariepskop rising to 1,944m (6,378 feet) above sea level whereas the lowest point is slightly below 561m (1,841 feet) above sea level putting its depth at 1,383m (4,537 feet).

Though it can be challenging to compare canyons world over, it can be noted that the Blyde River Canyon is among the world’s largest Canyons and is believed to the largest green canyon considering its luxuriant subtropical foliage as always viewed by travelers on Africa Adventure Vacation holidays.  The Blyde River Canyon is recorded to be the second on the continent of Africa after the Fish River Canyon and is truly considered among the amazing natural wonders on the continent.

The Three Rondavels present the most fascinating view in the whole canyon appearing as huge rocks with round shape believed to the housing remains of the indigenous people. The Bylde Canyon is known to be a section of the Panorama Route which starts at Graskop town through the God’s Window, Bourke’s Luck Potholes and the Pinnacle.

Blyde is a Dutch word meaning happy or glad which dates far back to the year 1844 when the Hendrik Potgieter along with others came back safely from the Bay of Delagoa to join their fellow trekkers who had considered them dead during the voortrekkers’ expedition.  Regarding the flora and fauna, the Blyde River Canyon features a range of fish, Hippos, Crocodiles, greater and lesser bush babies, Samango Monkeys, vervet monkeys, Birds like African Fish Eagle, Cape Vulture, white-rumped vulture, African emerald cuckoo, olive bush shrike among others which is always impressive to explore by travelers on Adventure Africa Safaris in South Africa.

The Africa tour to Blyde River Canyon can extend to incorporate an adventure experience in the famous Drakensburg Mountains. This amazing scenic feature can be compared to the 100m deep Kyambura gorge or the less than 7m ravine of Murchison Falls as explored on safaris in Uganda Africa.