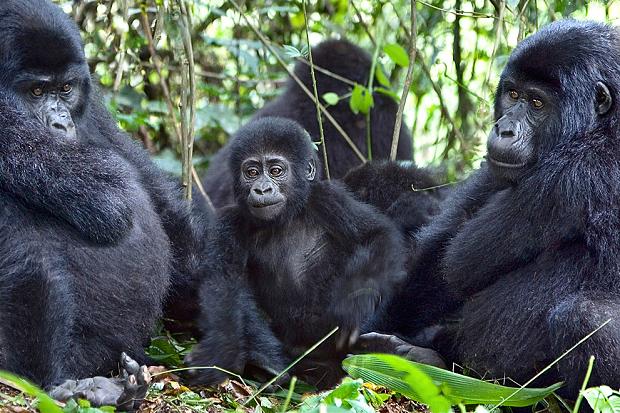 Scientifically referred to as Gorilla beringei graueri, the Eastern Low land Gorillas are  one of the prime Congo gorilla Safari products known to be the largest of all gorilla sub species.

The Male Eastern Low land Gorillas can stretch to 204 – 250kgs in weight though some males can exceed to 272kg and beyond while the females tend to be half the male size.  The male Eastern Lowland Gorilla rises to height of 1.76 – 1.94m while females are around 1.6m or below.

Unlike the Mountain Gorillas always explored on Uganda gorilla safaris and Rwanda Congo Gorilla tracking safaris, the Eastern Low land Gorillas feature shorter hair on the body and the head but they both enjoy the Silver patch on the back for the mature males.

The Eastern Low land Gorillas thrives in the low land equatorial jungle of Democratic Republic of Congo and unfortunately, their habitat has decreased drastically from 8,100m2 to 4,600m2. This means that they apparently occupy only 13% of their initial range. An estimate of 17,000 eastern lowland gorillas was known to exist in 1990s but apparently scientists estimate that about 50% has disappeared. The actual counting of these sub species has for long been hampered by civil unrest.