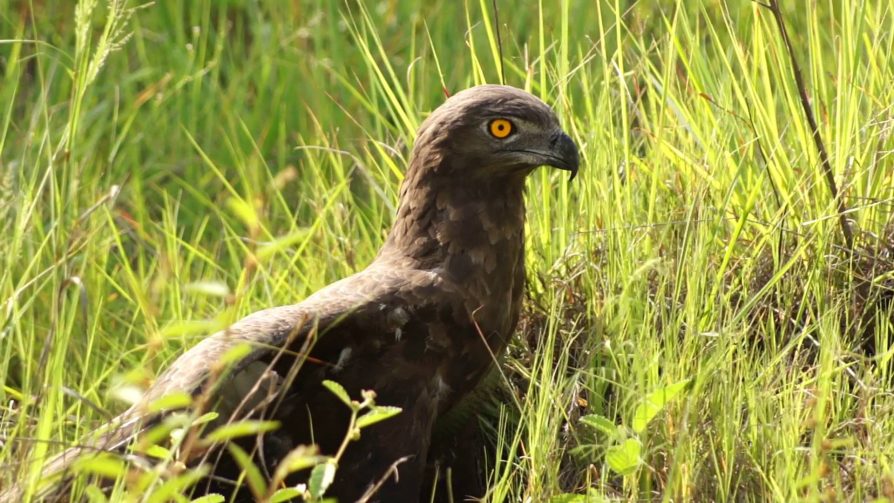 Scientifically referred to as Circaetus cinereus is one of the popular birds of prey always explored on Uganda birding safaris and tours. Belonging to the family Accipitridae and Circaetus Genus, the Brown snake eagle thrives in the East, West and South of Africa.

The Brown snake eagle is all brown with some of them featuring some white feathers. The fledging of the juvenile occurs between 60 – 100 days in the nest after which it goes independent. They feature brown tail with white tip and barring. The legs are long and bare while the feet are pale gray. The eyes of brown snake eagle are yellow while the beak is black in colour as viewed on birding safari in Uganda.

This bird species are notably quiet only vocalizing while in flight, when carrying snake or during displays.  They spend great deal of time perched in a tree or at a high place such as an electric pylon.  The brown snake eagle features average size and extends to only 60 – 70cm in height.  They feature a life span of seven (7) – ten (10) years.

They tend to occupy nests that have been made by other birds or repair the partially destroyed and deserted nests. In situation where they intend to build a new one, they look out for a high rock or a tree that is distant from predator habitat and human settlement.  Just like other snake eagle species, the brown snake eagle lays one (1) egg every year and the female undertakes the incubation.

The Brown snake eagle thrives in arid, open and dense woodland between 0 – 2,500m above sea level and would avoid lowland forested areas and deserts.   They are listed as species of least concern on the red list of International Union for Conservation of Nature (IUCN).