Buganda tourism expo; a must attend 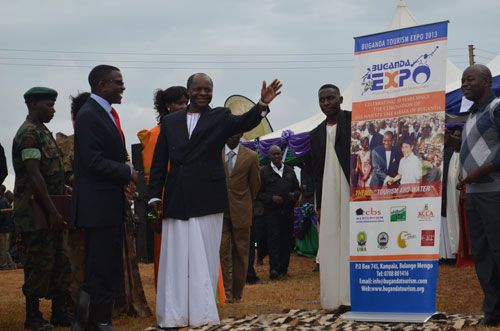 Kingdom of Buganda in Central Uganda is a rich heritage and cultural destination featuring history of antiquities which it has enabled to maintain until the contemporary times as seen on Uganda safaris.
Standing as the most organized centralized Kingdom in Uganda, Buganda saw the arrival of the Arabs who were the first foreigners to come to Uganda followed by the Explorers then the missionaries and eventually the colonial masters. Considering its location on the shores of Lake Victoria and the source of the Nile River which was the main point of interest for the early explorers, Buganda has taken advantage of all these changes to build its mighty over other monarchical Kingdoms and Chiefdoms of similar stature in Uganda right from the pre-colonial time to the colonial time and Uganda after independence.
Its pride that rests in its culture is the main strength that has kept the Kingdom moving. It is quite surprising that despite the capital City Kampala being at the center of the Kingdom with a cosmopolitan intermixture of both local and foreign cultures, Buganda still has considerable intact heritage to depict to the world representing its true past something that is worthy encountering on safaris in Uganda.
It is from this back ground that Buganda has come up with the initiative to conduct an annual tourism expo in order to showcase this heritage. Ranging from the royal regalia and the Kingdom palace in Lubiri to the Royal tombs at Kasubi where four of the Buganda Kings lay in rest, the Wamala tombs, Naggalabi Coronation site, Ssezibwa falls, traditional foods and their preparation not forgetting the traditional Kiganda dances combine to make the tourism in Buganda beyond the ordinary.
Therefore, the 2015 Buganda tourism expo is a must attend event scheduled to take place for 23rd to 30th August at the Kingdom’s extensive grounds of Lubiri showcasing a range of items including the 700 drums that are used to perform traditional and cultural activities in Buganda Kingdom, the two (2) Rolls Royce cars that belonged to Ssekabaka Muteesa II, exhibits from different Baganda clans, the first hoe which the Baganda used prior to the coming of Europeans along with other foreign exhibitors from other parts of Uganda and the neighboring countries including Kenya, Burundi, Tanzania and Rwanda not forgetting European embassies in Uganda. To participate in the event as an exhibitor, one need to register at Buganda Tourism Offices which the public visitors will have to carry a small sum of 3,000 Uganda Shillings only. Travelers on safari in Uganda are encouraged to attend.