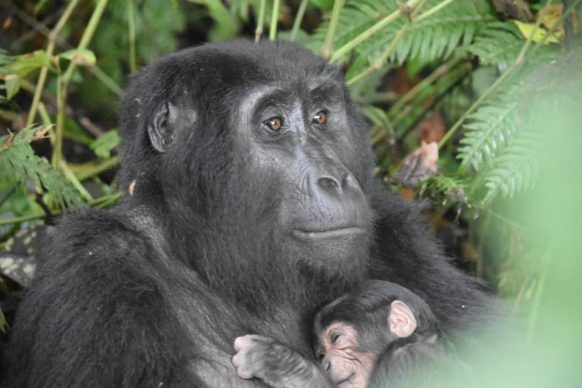 Despite the effects of the COVID-19 pandemic on Uganda’s tourism industry, it has not stopped Bwindi Impenetrable National Park from enjoying its fruits of conservation. Currently, the Bwindi Impenetrable Forest is experiencing an unprecedented baby boom in its mountain gorilla population after 5 baby gorillas have been born in 6 weeks. According to the Uganda Wildlife Authority (UWA) officials, Bwindi Impenetrable National Park has over 7 gorilla infants since January this year.
Speaking to the Uganda Wildlife Authority officials, they have clarified that there are is no reason as to why there have been a sudden spate of births and they ruled out any effect of coronavirus lockdown measures because gorillas have a gestation period of about nine months. However, the UWA believes its efforts to adopt a consistent conservation approach, anti-poaching patrols, around-the-clock veterinary team and 24/7 monitoring of the gorillas is paying off.
The latest arrival baby gorilla is from the Nyakagezi gorilla family in Mgahinga Gorilla National Park. This time, the baby boom is from Nshuti the Adult female from Nyakagezi group that gave birth to a lovely new baby on September, 2nd 2020. Nshuti like her name is a friendly adult female. The group number has increased to 9 members.
The second latest baby boom is The Rushegura gorilla family welcomed this bouncing cute baby gorilla from Adult female Ruterana increasing the family membership to 18. The birth takes the tally of new births in the forest to 5 in just six weeks! The newborn marks Ruterana’s third offspring. Ruterana was born Jan, 1st, 2002 making her 18 years of age. Unfortunately, her first infant, born in 2012, died from pneumonia at just two weeks old.
The third baby boom is from the Buhoma sector. This bundle of joy was born to Kibande of Rushengura gorilla family in Bwindi Impenetrable National Park. This is the second birth in this gorilla family that has been recorded in less than two months. Kibande’s new birth makes it her fifth surviving offspring and raises the Rushengura family size to 17 members. She is also the most senior lady and kingmaker of the family.
The fourth and fifth two baby gorillas came from two separate groups of Mubare and Oruzogo families in the same week. The baby gorilla in Mubare family was located in the Buhoma gorilla trekking zone and was first sighted on July 22, 2020. The mother of the baby gorilla for this family is adult female called Nyampazi. The leader of the Mubare family is Silverback Maraya. The birth raises the Mubare family size from 8 to 9 members.
In the Oruzogo gorilla family, Katoto the Adult female of the group was found nursing the little one on July 25, 2020. The birthmarks Katoto’s first baby with the lead Silverback of the family Kagaanga. The birth raises the total number in the group to 15 in Ruhija Uganda gorilla trekking sector.
Every birth is a success for the species and Prime Safaris & Tours Ltd is always happy to receive such good news!

The International Union for the Conservation of Nature classifies mountain gorilla as endangered species since November 2018. Until November 2018, the same species had been classified as critically endangered. East Africa’s mountain gorilla population had sharply dropped in the past century because of poaching, illness and human encroachment. Recently, a Ugandan man was sentenced to 11 years in prison last week over the killing of Rafiki, who went missing on June 1 and was found dead the next day, the apparent victim of a spear attack. An arrest was made on June 4, and authorities said the suspect was in possession of several hunting items, including a spear and snares. He told investigators that he killed the gorilla in self-defence before he was convicted.
Other mountain gorillas have died because of natural causes, while some have fallen from trees and others killed during male battles for territory or dominance. A major threat to the gorillas has been poaching.
As of today, about 1,000 mountain gorillas live in protected areas in Congo, Uganda and Rwanda, serving as a critical source of tourism revenue for those countries. A Uganda gorilla safari permit costs up to $700 in Uganda, and it receives thousands of tourists pay each year. A similar permit costs upward of $1,500 in Rwanda in case one is interested in a Rwanda gorilla trekking safari. A Congo gorilla trekking tour permit costs only $400 however, it has two different gorilla species; Mountain Gorillas and Lowland Gorillas.

Those funds are essential to protecting the animals because authorities can use some of them to invest in anti-poaching activities and help local communities.

In March, most of Uganda’s tourism sector was shut down and the industry is slowly opening up but primates are of particular concern as they share so much of our DNA. Now, small groups of visitors are allowed into protected areas as new safety procedures, such as wearing face masks and social distancing, are tried out.

Poaching has also been a major worry for authorities, especially during the lockdown.