Uganda’s Joshua Cheptegei made an exciting return for competitive athletics at the Monaco Diamond League meeting on Friday (Aug 14), as he smashed the much-vaunted 16-year-old 5,000 m world record. 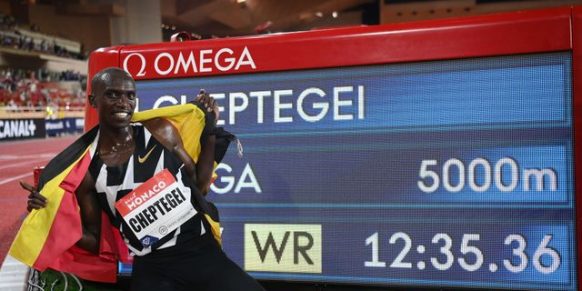 For a season almost wiped out by the coronavirus pandemic, his impressive performance capped a warm welcome back for track and field, with fellow world champions Noah Lyles and Karsten Warholm both shining on the track.

Lyles had worn a black glove on his right hand and raised his fist to demonstrate his support for recent anti-racism marches at the start of the 200 m. 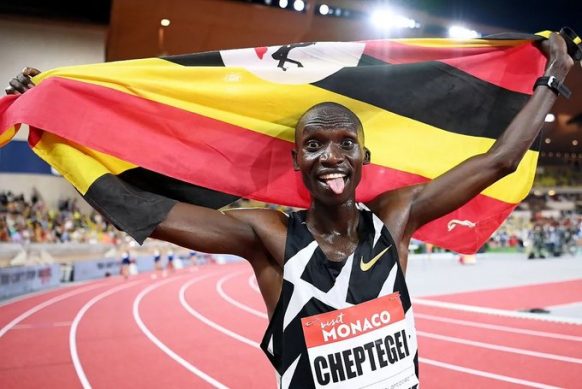 “I’ve tried to improve on my speed,” said Cheptegei when asked what he had been working on since his world gold medal showing in the 10,000m in Doha last September.

“It took a lot of minds setting to keep being motivated this year because so many people are staying at home, but you have to stay motivated.”

The Ugandan added: “I pushed myself, I had the right staff with me, the right coach. I’m also usually based in Europe, but being based in Uganda with my family was actually great.”

Cheptegei, 23, had predicted a world record run at the Diamond League meeting and delivered as he clocked a time of 12 minutes, 35.36 seconds, destroying the 12:37.35 mark that Ethiopian Bekele set in the Netherlands in 2004.

The Monaco leg of the Diamond League was the biggest international athletics meet so far in an outdoor season all but wrecked by the pandemic.

Up to 5,000 socially distanced fans were allowed into the 16,000-capacity Stade Louis II stadium by the Mediterranean Sea for the meeting.

Leading the way was Cheptegei, the 2019 world champion over 10,000 metres, who was in hot form before lockdown, setting world records over 10km and 5km on the road the shorter of those also coming in Monaco in February, his last race before Friday’s meet.

He took up the running at halfway, churning out 61-second laps and delivered a 2:30 split for the final kilometre, remembering to stop his own watch as he crossed the line.

“It took a lot of mind-setting to keep being motivated this year because so many people are staying at home, but you have to stay motivated,” he said.

The track meet known as Herculis is renowned for fast times, especially in middle-distance running, and produced a world record for the third straight year.

Yet that seemed less likely in an Olympic season when all athletes’ plans and preparations were upended by the coronavirus and the resulting postponement of the Tokyo Games.

The Diamond League meeting in Monaco marked the start of the competition season following exhibition events in Oslo and Zurich in June and July.

Owing to the coronavirus pandemic, meetings in Eugene, London, Paris, Rabat, Gateshead and Shanghai were all cancelled.

Running in front of a reduced capacity of 5,000 masked spectators in accordance with Covid-19 limitations, music blacked out as World Athletics introduced a “unique environment building program” to improve the experience for competitors, fans and television viewers in the absence of a full crowd.

Warholm showed no sign of coronavirus-induced rustiness as he led from gun to tape to clock a meet record of 47.10sec in the men’s 400m hurdles, the first time he has run the event since he won his second world title in Doha.

“It’s a great start,” said the Norwegian. “I’m happy to be back. It’s great seeing some audience… competitors at my side.”

World 200m champion Lyles also had no problems in his race, sweeping to a convincing victory in 19.76sec.

Raising a black-gloved fist to the air when introduced to the crowd, the win was the perfect tonic for Lyles, who has admitted to psychological problems worsened by the “perfect storm” of the Covid-19 outbreak, the Black Lives Matter movement and the postponement of the Tokyo Olympics at which he was hotly tipped for success.

“It’s a lot better to be out here competing instead of being in your backyard,” said Lyles. “I have high expectations for myself so I’d say the race got the Noah stamp of approval but not the Noah satisfaction stamp!”

After world 1,500m and 10,000m double gold medallist Sifan Hassan dropped out of the running, Gidey took up the fight, leading Obiri through the bell.

But the Kenyan responded magnificently, sprinting away for the win in a meet record of 14:22.12.

Obiri’s teammate and fellow world champion Timothy Cheruiyot also held off Norway’s Jakob Ingebrigtsen for a thrilling win in the men’s 1,500m, taking the victory by 0.23sec in 3:28.45.

American Donavan Brazier made no mistake in the men’s 800m, bettering his world lead to 1:43.15.

However, there was no such success for US compatriot and world 110m hurdles champion Grant Holloway, who could only finish fourth (13.19sec) in a race won by Cuban-born Spaniard Orlando Ortega (13.11).

Earlier in the day, French pole vaulter Valentin Lavillenie was ruled out of the competition after testing positive for Covid-19.

That competition was claimed by Sweden’s world champion Mondo Duplantis with a best of 6.00m. His American arch-rival Sam Hendricks missed the event as his poles had not arrived.

In the other two field events on show, Venezuela’s Yulimar Rojas won the women’s triple jump with a best of 14.27m, while world heptathlon champion Katarina Johnson-Thompson of Britain could only finish sixth (1.84m) in a women’s high jump competition won by Ukrainian Yaroslava Mahuchikh (1.98).