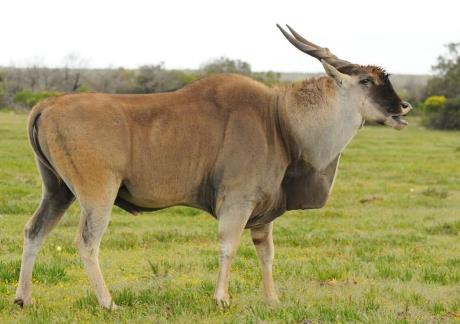 Also referred to as Taurotragus Oryx, the Common Eland is one of the popular Uganda Safari tour wildlife species that are impressive to explore.

Known to thrive largely in the savannah stretches of Eastern and Southern Africa, the Common Eland belongs in the family Bovidae and the Taurotragus genus and it was first detailed in 1766 by Peter Simon Pallas.

The mature male Eland as viewed on Safaris in Uganda can rise to 1.6m at the shoulder height and stretch to 942kg in size with an average weight of 500 – 600kgs while females tend to be 20cm shorter than females and can carry a weight of 340 – 445kgs. This makes the Common Eland world’s second largest antelope after the Giant Eland.

The Eland is majorly herbivorous and feeds greatly on leaves and grasses. They are noted to be social and can thrive in herds stretching up to 500 members and are not territorial as always heard on the guided themed interpretation during game drives on Uganda Safaris.

The habitats of Common Eland include areas with a wide range of flowering plants including; savannah, open and montane grasslands, woodlands and would avoid dense forests.  Communication is carried out by loud barks, postural and visual movements.

The people have at times used the Common Eland for meat, leather, rich and nutritious milk a reason they have been domesticated in a range of areas. However, the Elands in Uganda are completely wild animals and all thrive in protected areas of Kidepo Valley National Park, Pian Upe Game Reserve and Lake Mburo National Park where they are explored on safari tours in Uganda Africa.