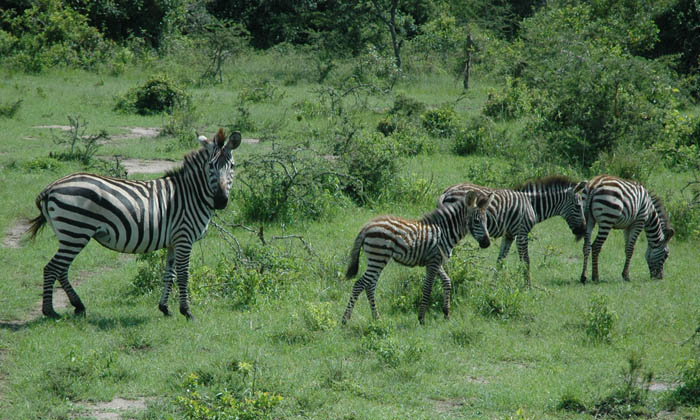 As part of the World Tourism Day celebrations that were held in Mbarara, the Uganda Wildlife Authority took the initiative to incorporate in the disbursal of 175 Million Shillings to the local communities around the Uganda Safari destination of Lake Mburo National Park under the revenue sharing scheme.

The 20% of the entrance fees collected from the travelers on wildlife safaris in Uganda at the park gates is supposed as per the Uganda Wildlife Act of 2000 to be shared among the local governments touching the boundaries of the park every year.

The event which was presided over by Rt. Hon. Ruhakana Rugunda – the Prime Minister of Uganda along with Prof. Ephraim Kamuntu the Minister of Tourism, Wildlife and Antiquities and his State Minister Hon. Godfrey Kiwanda saw the 175 million Shillings for the year 2014 / 2015 handed over to the local leaders in cheques amidst great excitement.

The three of the beneficiaries namely; Mbarara Municipal Council, Kiruhura District and Isingiro District received 11,033,390/=, 89,369,900/= and 74,963,193/= respectively to facilitate various project developments for community empowerment and livelihood improvement that will in turn strengthen community conservation and appreciation of Uganda Safaris and tours.

In the District of Kiruhura, the funds will be utilized to facilitate water dam construction in Akaku and Rushororo in Kanyaryeru Sub County, Rwabarata – Kakunyu community access road opening in Rwamuranda parish, supporting self help projects like; Poultry scheme in Kiribwa, bull fattening in Nombe II, goat rearing in Kigarama all in Sanga Sub county, piped water in Byembogo Cell, fencing of valley tanks in Rurambira Nyakashashara Sub county and Akatoma Primary school construction in Nyakahita

In the previous year, 455,957,607 Uganda Shillings was disbursed under the same scheme benefiting the surrounding communities.  The funds are disbursed as per the guidelines of revenue sharing scheme and the projects supported must be in line with these guidelines.

Lake Mburo National Park is noted to receive a range of 26,000 Uganda tour undertakers every year earning about 200 million Uganda Shillings. And as per the Uganda Wildlife Act, the 20% has to be disbursed to the surrounding communities under the collaborative management approach that aims at mitigating human wildlife conflict. The surrounding communities are always victims of problem animals and animal encroachment on private lands.