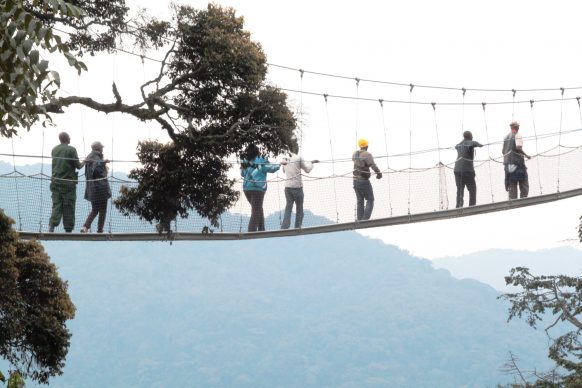 Initially the local people surrounding Rwanda Safari parks including Nyungwe used to practice traditional means to extract resources from the forest including honey extraction. Because of rudimentary methods applied, the forest survival could be compromised as issues like fire outbreak were rampant and the production volume was really small.

It was not until 2009 after the Rwanda Development Board (RDB) intervention, that things began to change for good. The local people were encouraged to form the cooperatives where they could receive support to stimulate their trade through the revenue sharing scheme. The scheme had started in 2005 targeting the National Parks of Akagera (wild game), Nyungwe (Chimpanzees) and Volcanoes where gorilla trekking safaris and tours in Rwanda are conducted.

The government through the 5% revenue sharing scheme has put up schools, hotels, hospitals and roads in the areas around these National Parks. The scheme goes ahead to support the farmers and artisans cooperatives among other group categories. Undertakers of projects like bee keeping have been trained in the modern farming practices and given modern materials to enhance their ventures.
This was disclosed during the inauguration of the newly built classrooms at Groupe Scolaire Gasakura in Bushekeri Sector, Nyamasheke District where the Rwanda Development Board (RDB) through the scheme and in conjunction with the district put up four (4) classroom blocks costing Rwf27 million on which RDB provided Rwf13.7 million. This inauguration is part of the countrywide bonanza for the 12th edition of the Kwita Izina ceremony slated for September 2nd.
The communities around Nyungwe Forest National Park apparently feature thirteen (13) cooperatives that comprise of over 1300 members and these people appreciate the development noting that it has increased their output without compromising the survival of the forest. The cooperative now operates an office and feature over Rwf15 million as capital. The members are able to afford school fees for their children, build houses, pay medical insurance and keep livestock.

According to the RDB Chief Tourism Officer, a sum of Rwf2.6 billion has been disbursed to a range of 480 projects across Rwanda noting that this is not to stop soon as they aim to capitalize on it to solve the human wildlife conflict.