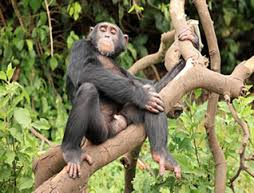 Budongo forest is located in the eastern part of Uganda; it’s a home to a total of 600-700 chimpanzees, and these have been conserved and well protected which has helped in maintaining the increase in the number of chimpanzees hence more chimpanzee trekking safaris.

These chimpanzees of budongo forest have attracted many chimpanzee tracking safaris to Uganda and they were first studied in 1960, this forest has got different communities of chimpanzees, these include; the sonso community, busingiro and the Kaniyo pabidi community, all these families have greatly attracted many tourists to come for chimpanzee safaris.

Busingiro community is located in the west of sonso and these chimpanzees were one of the first habituated individuals in Budongo, this community has greatly attracted many visitors to trek chimpanzees in Uganda.

The other community is known as Kaniyo pabidi , this one is also habituated for tourism, it’s found in the northern part of the forest, these travel into the surrounding savannah and also enter Murchison falls national park. These have been visited many tourists who come for chimpanzee tracking tours to Uganda.