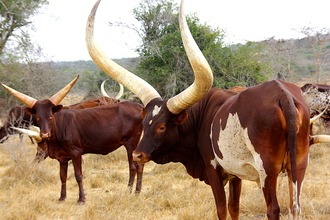 The Ankole long horned cattle is one of those heritage assets that the contemporary man has inherited from the legendary ancestors. Always sought after by the travelers on safaris in Uganda, the Ankole long horned cows are beyond the ordinary.
Believed to have been left behind by the Bachwezi who were semi gods that inhabited the parts of inter-custrine region far back in the traditional Africa, the Ankole cows are known for their remarkable beauty and distinctiveness from other species of cattle that are spread across the world which makes them an impressive Uganda safari product.
However, with the wave of change that came with modernity, the survival of the Ankole cow was threatened with the increasing need to increase productivity in the ever decreasing pieces of land. The exotic breed or call it Friesian became a darling to many cattle keepers and those who had small pieces of land had to do away with the Ankole cows to provide space for the high quantity milk producing exotic cows. People with vast lands only managed to remain with the Ankole breed though they would prioritize it for sale in case of any need other than the exotic ones. This can be seen while on safari in Uganda as most of the farms along the touristic routes contain the exotic ones compared to the former.
It should be noted that the Ankole long horned cattle is a drought and disease resistant cattle breed that have managed to thrive in the dry lands of Ankole Masaka where cattle keeping is a priority. Its unique features such as the pattern of its horns where some have straight horns others with curved ones or spread apart, their body colors where some have pure colors while others have dotted ones, the spread of their bodies as they are more raised than the exotic ones, their friendly nature to humans and amazing sounds calls for conservation. These unique features have always impressed visitors who have encountered them while on safaris in Uganda.
The conservation of Ankole long horned cattle is beyond mere conservation. It is an ancestral role that we must adhere to. The Ankole cow has flowed down the chain with the descendants of their owners. You find a family having a cow whose ancestors have been in the family for like 90 years. That it’s an offspring of this, which was born of the other so on up to the initial origin. The owner had a favorite lineage a particular cow either because of its beauty, its relation to tradition, milk production or its origin. He would then pass it to the son whom he knew that he would preserve it and the flow could keep like that. Selling such cow was abominable and when it died, it would not be eaten but would be buried like a human being. This was an ancestral role and contributed greatly to Ankole cow conservation.
In contemporary times where people are minding less about these traditions even the typical descendants of these people with their hearts taken over by the revenue offering generated by the large quantities of milk from the Friesian cattle, there is a need to do the rethinking and carryout the Ankole cow conservation for sake of our ancestors and as a role that they left to us to ensure their continuity.
Fortunately, tourism has come in, travelers plan safaris to Uganda to encounter these unique species. We can tap into this and generate enough from these Species of cattle. Additionally, the Ankole long horned cattle has the best quality meat and milk ever not forgetting quality cheese and butter. All these can be put to the modern commercialization to ensure that we identify a justification for this Species conservation. The ancestral owners of these cows never had gardens or food stores, they depended on their cows for milk as drink, meat and blood as food, the cow’s urine and dung formed great medicine while the hides were clothes, carpets in their traditional huts and would be crafted in to sandals. Thus, we have an ancestral role to conserve the Ankole long horned cattle.
Uganda safaris/Uganda safari News
Prime Uganda safaris & Tours Ltd