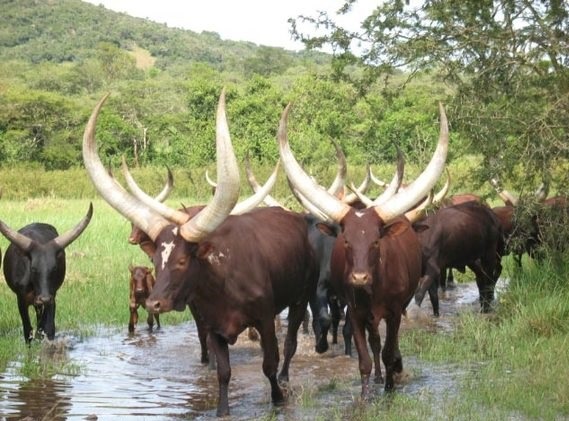 Fortunately or unfortunately, I find myself biting through some delicious pieces of African beef as I write today. In many families around the world, meat seems to feature on mum’s daily recipe in a varied number of shapes and sizes. It could be a few meatballs with spaghetti, minced meat in a samosa or kebab, talk about violently tearing through some well-done pieces of steak, or just swallowing a burger; yummy! We even teach our kids to politely ask for an extra piece of meat.
I could easily say that we love meat, but I cannot be certain enough to utter that all men love cows. But guess what; my long tours and safaris in Uganda have introduced me to people whose love for their cows is better than life. To them, a source of beef is just a mere supplement.
Forgetting the few hundreds that you might see crossing the streets of Kampala Uganda’s Capital, in the countryside a number of people have for long reared cattle in several thousands and have passed on a wealth of deeply captivating traditions and customs through the cows to future generations. There’s much to discover on a Uganda Safari and Tour to famous pastoralist regions in the northeastern, western and southwestern parts; among the Karamojongs, Banyankole and the Bahima.
With sincerity of affection, Ugandans named and still name their cows. Children at the age of seven (7) already know how to apportion names, guided by the cow’s character, its skin outlines, its size, horns’ shape and sometimes the manner in which it is born.
Even with the dominance of global currencies, a number of traditional Banyankole men still barter cows for items they need and in most Ugandan communities, a bride is bought at a price of several heads of cattle.
A Safari in Uganda to the districts of Bushenyi and Ntungamo will lead you to the Nshenyi people who believe that the only heroes in the community are those with the most heads of cattle. The Nshenyi people compete in gathering these animals and when a man makes a herd of 100 animals, he is offered a bell to tie around his most loved cow of that herd. When he moves with his cows through the village, the bell is sounded, signaling that “a rich man is in the community”. Unlike the people of Buganda Kingdom who slaughter a bull or two to celebrate, and then use its skin to make drums, the people of Nshenyi are fine with eating weeds and letting their cows live.
Cows also had kings infatuating on them. One of the stories you will hear on a Safari to Igongo Cultural Center in southwestern Uganda (along the same road that leads to the western National Parks), is about a cow called Mayenje ga Ishinjo Rutanyuobwa Bigomba which won the heart of King Kabundami of Buhweju. When this gorgeous cow was stolen by the covetous king of the neighboring Nkole kingdom called Ntale IV; King Kabundami sent an army led by “Muguta Ya Butaho” to salvage the cow in a battle that claimed up to 4,000 lives.
It’s obvious that the majority of tours and safaris in Uganda lead to the undoubtedly blessed National Parks, but there’s a lot more showcased in this small land locked country for everyone to add to their next month’s itinerary including a visit to Uganda’s cattle rearing communities.