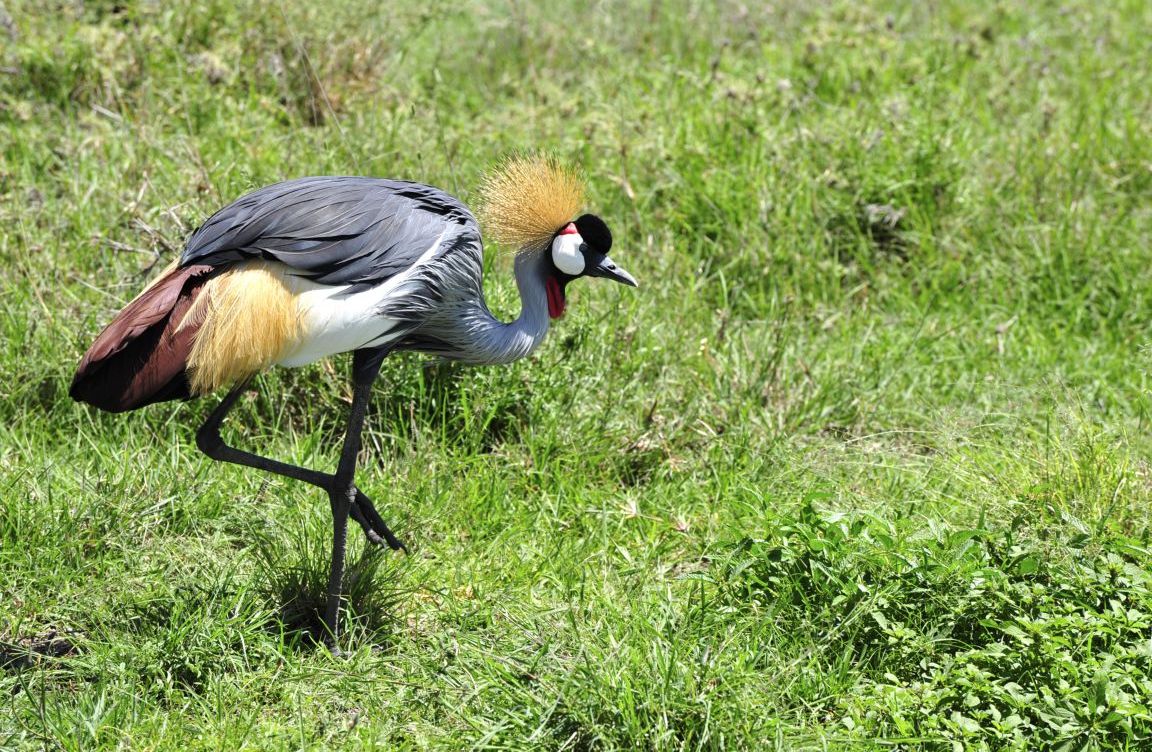 Marked by stiff gold colored feathers on the head, grey and relatively short bill not forgetting the long legs that help to wade through the grasses, the grey crowned crane is indeed fascinating bird species that have been of special interest to both the locals and Uganda Safari undertakers.

Probably, their striking beauty must have formed the background for its selection as a national symbolic bird appearing on the Uganda Flag and the Uganda Court of Arms. However, it is very unfortunate to note that despite the Grey Crowned Crane’s striking beauty, calmness, popularity and profoundness among the travelers on Uganda Safaris, it is at the risk of getting extinct.

The Grey Crowned Crane’s population has drastically reduced over the last four (4) decades and surprisingly, this bird species that once spread all over the country, their current population is estimated between 10,000 to 20,000 Gray Crowned Cranes which is far less 100,000 that were estimated about four (4) decades past according to the statistics from Nature Uganda and Ministry of Tourism, Wildlife and Antiquities.

A count of 15 Gray Crowned Cranes thrive in the world and the African Continent majorly features two Species namely; the East African crested crane also referred to as Balearica regulorum gibbericeps thriving in the nations of Uganda, Tanzania, Kenya, Rwanda, Democratic Republic of Congo, Burundi, and Mozambique and the Southern African species also known as Balearica regulorum regulorum that majorly thrives in Zimbabwe and South Africa.

The considerable decline has been recorded among the East African Sub species and according to the Director of Environmental Affairs at the Uganda’s Ministry of Water and Environment Paul Mafabi, these species have for example reduced from 35,000 to a range of 20,000 – 25,000 in Kenya in the three (3) decades while less than 1,000 crested cranes thrive in each of the remaining East African nations of Burundi, Rwanda and Tanzania. As a result of this trend, the International Union of Conservation of Nature (IUCN) was prompted to include the Grey Crowned Cranes on the endangered species list in 2012.

Many conservationists, tourism industry players including those that do birding safari tours in Uganda have attempted to ascertain what could be the drive behind this trend and the answer is majorly the Habitat loss. The seasonal wetlands along with swamps that used to provide ideal breeding ground for Grey Crowned Cranes have been encroached on for Agriculture, construction and other land developments. These Species feed on grass seeds, frogs, insects, small toads along with other invertebrates and this food is common in wetlands, river banks, open grassland and around dams which definitely makes the areas habitats for Grey Crowned Cranes. Unfortunately, these species have unique nesting patterns as they usually return to the same spot every year and thus any destruction or threat to such places definitely affects breeding patterns thus affecting their continuity.

Other causes of Grey Crowned Crane’s population decline include; conflict with humans over crop damage, capture for pets, their monogamous nature in which they pair once and any loss of partner marks the end of the breeding and failure to breed in captivity.

Several efforts are being put in place to ensure the survival of these species and Nature Uganda intends to gather 1.2 Billion Uganda Shillings over a spread of five years for Grey Crowned Crane habitat restoration and conservation.