DANCE, MUSIC AND CRAFTS; RWANDA AT HER BEST

Home » DANCE, MUSIC AND CRAFTS; RWANDA AT HER BEST 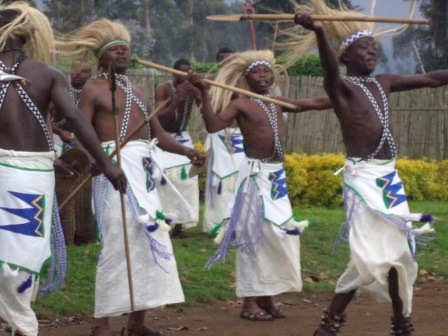 The Arts play a significant function in traditions of the people of Rwanda and form the center of the most authentic products explored on safaris and tours in Rwanda. Their performances range from exhibitions of excellence and bravery to the artistry held in ancient agricultural roots.

The Intore Dance Troupes perform the finest displays of the dynamic traditional styles of dance and music in the destination Rwanda. The Intore literally translated as The Chosen Ones feature a great heritage that dates back to a century past as they performed exclusively in the Royal courtyard. These people were taught the jumping techniques and military drills to perfect their dancing style – something that has lived to mesmerize even the contemporary Rwanda safari tour undertakers.

The Intore wear grass wigs and hold clutching spears as they move to the beat of the drum making it a magical moment worth exploring. Apparently, these live Intore performances can be viewed at museums like National Museum of Rwanda, cultural villages like Iby’wacu Cultural village, hotels and Rwanda tour lodges across the counts and at the Volcanoes Park headquarters Kinigi every day as the travelers on Rwanda gorilla trekking safaris and tours await briefing.

The traditional Songs are escorted by an eight string harp like instrument called Lulunga whereas the more jubilated dances are supplemented by Orchestra drum that typically features seven (7) to Nine (9) members that collectively derive a hypnotic and mesmerizing intertwining rhythm set.

Regarding crafts, the local cooperative in the village of Nyakarambi Village produces unique crafts called Imigongo or the cow dung paintings which are distinguished by whirls colored in black, brown and white along with other geometric shapes. These remarkable earthy products are available all over the craft markets in the country and those on safari in Rwanda can purchase some as souvenirs.

The traditional skill of basket making and weaving has also stood the taste of time and apparently the dry containers are made for food storage along with medicine. These are also used to carry gifts or as gifts themselves on traditional functions. The pottery expertise and ancient skill of the Batwa people is noted to be among Rwanda’s oldest skills and up to today, these pots are still utilized for storing liquids and cooking.