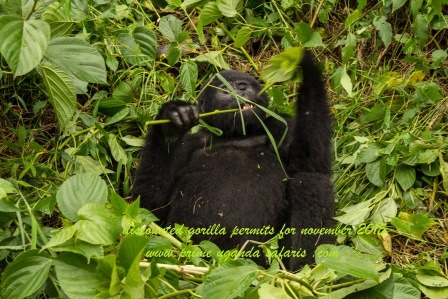 Uganda – the pearl of Africa is offering a discount to the world travelers who might be interested in undertaking Uganda gorilla safaris in the forthcoming months of November.
With almost a half of the world’s mountain gorilla populations in her two mountain gorilla habitats of Mgahinga and Bwindi Impenetrable National Park, Uganda has positioned herself to listen to the need of every traveler. In the month of November which also coincides with the rainy season herein Uganda, the gorilla trekking permit which is normally sold at $600 permit for the foreign nonresidents will reduce to $350 this allowing one to save $250 if he /she chooses to undertake a gorilla trekking safari to Uganda unlike other destination with a similar product.
Bwindi Impenetrable National Park features a minimum of 400 mountain gorillas and twelve gorilla groups out of this number have been habituated specially for gorilla trekking experience distributed in its four regions. Rushaga in the south of Bwindi features gorilla groups of Mishaya, Bweza, Nshongi, Busingye and Kahungye; Ruhija in the east of Bwindi features gorilla groups of Kyaguliro, Oruzogo and Bitukura; Nkuringo in the south west features one gorilla group of Nkuringo while Buhoma in the north of Bwindi and the most popular features the gorilla groups of Mubare, Rushegura and Habinyanja. To the extreme south west, there lies Mgahinga Gorilla National Park also featuring one habituated gorilla family Nyakagyezi. It can be noted that more two gorilla groups are under habitation in the south of Bwindi and will be added to those that are encountered on gorilla safaris in Uganda.
For other groups other than the nonresident foreigners, their discount has also been given consideration. The Citizens of the partner states in the East African Community will have their 100,000/= Uganda Shillings saved while the resident foreigners in the partner states of the East African Community will have their $200 saved if they do a gorilla safari in Uganda during the month of November.