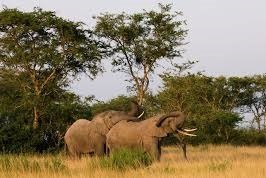 Conveniently located in the south western part of Uganda, Queen Elizabeth national is Uganda’s exceptional safari destination offering the best wildlife watching experiences which cannot be got anywhere else in East Africa. The park has enormous wildlife species which deserve to be explored by any adventure seeker planning safaris to Uganda.
Taking Uganda safari to discover the unique wildlife/ Fauna species inhabited in the famous queen Elizabeth national park is one of the choices potential traveler should not research about. This is because the diverse natural habitat ranging from, shady, sprawling savanna, humid forests, sparkling lakes and fertile wetlands, support the survival of gigantic big game as well as the ten (10) primate species and other big cats.
The park is proud of 95 mammal species and amazing 5000 hippos, 2500 elephants and over 10,000 buffalo thriving/surviving in the park’s grasslands and shorelines; The Park offers an assurance to visitors on Uganda safari tours the sightings of Africa’s most iconic wildlife species especially the African elephants whose calls reverberate around Queen’s crater-filled valleys. Other common herbivores include Uganda kob, warthogs, waterbuck and Topi, as well as the sitatunga antelope.
In addition to above is the big cat species i.e. felines: lion, leopard, civet, genal and serval cats. Lions also described as the King of the jungle are easily sighted by visitors in different parts of the park, but the most renowned/famous live or thrive in the southern sector of Ishasha, where they tend to rest on the limbs of fig trees. Queen Elizabeth also offers views of the Solitary leopards and these are mainly encountered when visitors on Safari tour to Uganda partake in an evening game drive along the designated trucks of the park.
The exceptional diverse vegetation that characterize the park is also acting as natural home to ten(10) primate species and among the outstanding ones include the endangered chimpanzee species, baboons, Vervet monkeys black-and-white colobus monkeys though not easily seen. Most of these primates are found in the park’s Kyambura Gorge where a memorable chimpanzee trekking safaris are conducted from in the park.
Uganda Safaris /Uganda Safari News
Prime Uganda Safaris &Tours Ltd