Elephant’s survival can be promoted through safari tourism

Home » Elephant’s survival can be promoted through safari tourism 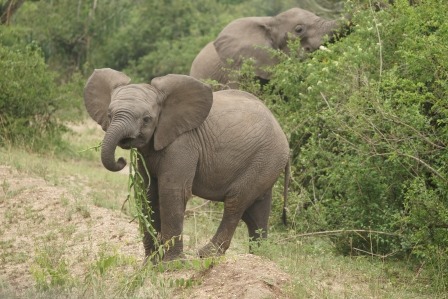 Elephants are noted to be among the African Big five and are among the notable Species of Wildlife that attract a range of world travelers to plan safaris to Africa including the safaris to Uganda.
However, the cases of elephant loss have been on the rise on the African continent including Uganda with issues like poaching claiming a considerable number of these species. For examples in the year 2012 alone, a total of 35,000 elephants were killed on the continent.
In Uganda, there are two elephant categories namely the Forest Elephant and the Savannah Elephants distinguished by the size of their body, the body structure and the color of the fur. The forest elephants are brownish in colour with small and elongated bodies to enable them traverse the forests while the savannah elephants feature large bodies as they move freely in their natural habitats as always explored on safaris in Uganda.
The savannah elephants are common in Kidepo Valley National Park, Murchison Falls National Park and Queen Elizabeth National Park while forest elephants are common in Kibale National Park and Semliki National Park. However, these two species can at times be found in the similar locality even cross breeding with one another.
The aspect of Safari tourism being capitalised on to promote the elephant survival is a good proactive measure to the elephant conservation. The Uganda Safari packages designed to incorporate the destinations where the elephants are viewed from, first of all, give the travellers including the domestic and International an opportunity to appreciate the beauty of the species and the same opportunity to the locals to realise the significance of the species
Safari Tourism is beneficial to all. The National Governments gain from the revenues collected from the sale of Visas, the taxes from lodges, transport suppliers among other related units, the local communities where these protected areas are located are able to benefit from the Revenue sharing scheme, market for their produce sold to the accommodation units and art and craft, employment priority in the running of those protected areas, the entire national population gains from the multiplier effect and increased job base while the travelers themselves have their travel lifetime dreams fulfilled. With all of the stakeholders benefiting from it, the efforts will be combined to ensure that this precious species thrive an extra day.
Conservation is a combined effort. This explains why the Participatory approach has had a considerable effect than other traditional conservation methods. The international wildlife traffickers have at times disguised as travellers on safari in Uganda and have thus utilised the opportunity to identify gaps and utilized them effectively. The people around these elephant habitats are at times used to poach and gather ivory to be given something in return while the park Authorities have at times relaxed to enforce the protection of such species as a result of poor facilitation in terms of finances and machinery. Therefore bringing all these people on board to appreciate the continuity of elephants and their potential as regards the safari tourism and its likely benefits would be a strategic move to ensure the elephant’s continuity.
Uganda still feature a count of 5,000 elephant population according to the Wildlife Conservation Society and thus boosting the safari tourism would base on this to build a sustainable number.