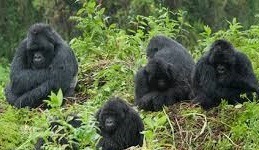 Kahungye is one of the five (5) gorilla families that are apparently thriving in the south of Bwindi Impenetrable National Park – Rushaga area and is always encountered by travelers on gorilla trekking safaris in Uganda.
The Kahungye gorilla family boasts of thirteen (13) members which include the three (3) silverbacks. It derives its Kahungye name from the local hill called Kahungye which is located in the area where the mentioned gorilla group is known to be thriving and visited by visitors on a gorilla safari in Uganda.
The gorilla group of Kahungye has got the head called Rumanzi and is followed by Rwigi and Ruhamuka. The gorilla family was brought to the limelight of the Uganda gorilla safaris in 2011 when it was opened to be tracked.
Though Kahungye gorilla family had twenty seven (27) members along with three (3) silverbacks, it split after two months and led to the formation of Busingye gorilla group that is also encountered by travelers on gorilla safari in Uganda.
Bwindi Impenetrable National Park is gifted with close to the a half of the world’s mountain gorillas as 400 out 880 mountain gorillas are noted to be living in the park. Its four gorilla trekking regions present a remarkable encounter with gorillas generating ultimate Uganda gorilla safari memories.
Uganda Gorilla safaris/Uganda gorilla safari News
Prime Uganda safaris & Tours Ltd