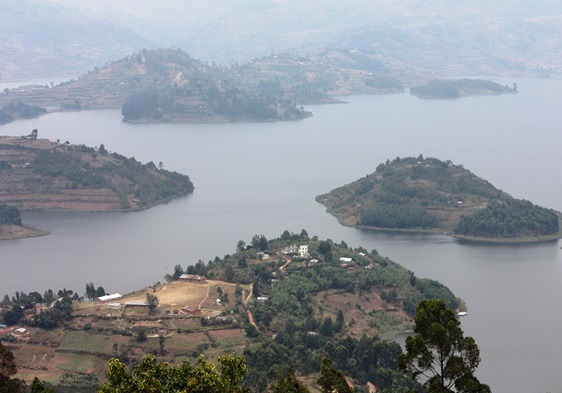 Lake Bunyonyi is at the moment among the most popular Uganda safari destinations in the south west of the country. Located in Kabale District close to the Uganda gorilla trekking safari destinations of Bwindi Impenetrable National Park and Mgahinga Gorilla National Park and Rwanda’s Volcanoes National Park, Lake Bunyonyi literally translated as the lake of many little birds presents a remarkable beautiful setting amidst the rolling hills of Kigezi Highlands.
Lake Bunyonyi is positioned at 1,962m above sea level stretching to around 25km in length and 7km in width. The Lake Bunyonyi’s depth is thought be ranging between 44m to 900m and if this is true, the n Kale Bunyonyi would definitely be the second deepest lake in Africa something that prompts a range travelers to plan safaris to Uganda to have an encounter with this natural feature.
Lake Bunyonyi’s treasure is built on its counts of the remarkable Islands that it contains. The 29 Islands are diverse and with a range of inhabits including the Bakiga and the Batwa. The great number of Islands has earned the lake of a thousand Islands amidst the rolling hills of Kigezi dubbed the Switzerland of Africa. This combination derives remarkable scenic views that are rewarding to encounter while on Uganda safaris and tours.
Initially the Lake had no fish but around 1930s, the fish was introduced to the lake. However around 1960s, the fish experienced a massive death following violent shallow mixing which brought about by wind. The stratification and depth of Lake Bunyonyi has made it hard for the Uganda Species like Tilapia and Nile Perch to thrive in large quantities. However, in 2002, about 300,000 Nile Tilapias were released to Lake Bunyonyi.
Exploring Lake Bunyonyi while on a safari in Uganda would not be in detail without encountering its main Islands of Bushaara, Akempene, Kyahugye Island Bucuranuka, Njuyeera and Bwama.
Uganda Gorilla safaris/Uganda gorilla safari News
Prime Uganda safaris & Tours Ltd