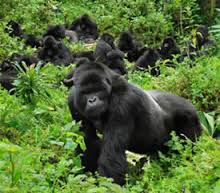 THE Group 13 is one of the prominent gorilla groups that are always encountered by travelers on gorilla safaris in Rwanda. The gorilla family which was at the time of habituation comprised of thirteen gorilla members which later inspired its naming is now boasting of about twenty five (25) gorilla members including one (1) silver-back along with twelve (12) adult females, two (2) sub adult female, seven (7) babies and three (3) Juvenile.
Initially undertake the leadership of Nyakairima, the Group 13 later taken over by Agashya after challenging the former in a fierce fight. It was a bewildering moment as the Agashya estimated the strength of Nyakairima before launching a fight against him. After winning the battle, it took the entire members up to the raised slopes of the Volcanoes such that Nyakairima should not track them again. Fortunately, he has managed to increase the gorilla count by getting from other families and incorporating other single living gorillas in the wild which increased the members in the gorilla family from the twelve (12) to twenty five (25) as can be encountered by travelers on Rwanda gorilla safaris.
The Agashya Silverback is known in the park to move his group up to the raised landscapes of the Volcanoes after sensing any danger. At times, travelers on their gorilla trekking safari in Rwanda have identified this when there is a silver-back that wants to challenge the Agashya. This forces the gorilla trekkers to climb higher as the group goes higher too until they reach the summit of the Volcano. Though this can take about twelve (12) of walking including return and thus exhausting, it is an exciting encounter of its own to encounter the critically endangered apes on the top of the world while on a gorilla safari to Rwanda.
Rwanda safaris/Rwanda safari News
Prime Uganda safaris & Tours Ltd