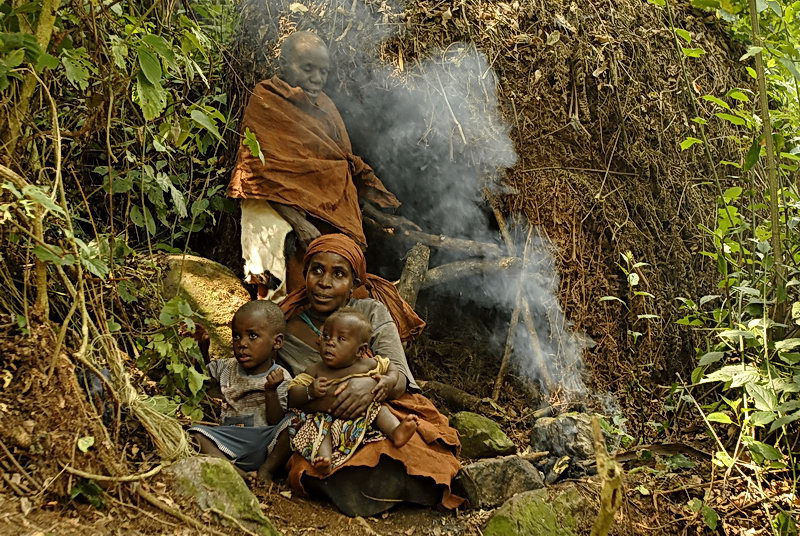 The dense forests of Bwindi impenetrable forest national park in the Virunga Volcano circuit were originally home to the Batwa group of people who were known to be hunter, gatherers and fierce warriors and fighters who depended on the forests for shelter, food and medicinal purposes.

The Batwa people and the endangered mountain gorillas of Bwindi impenetrable forest national Park  before the eviction of the Batwa’s in 1991 when the land was declared a national park; the tribe lived in the forest and was nicknamed “keepers of the Forest”. They survived on hunting wild meat using arrows and nets and gathering fruits in the forest; leaves and roots for medicine, papyrus and thatch for building shelter.

The Batwa people are pygmies believed to have migrated from the Ituri forest of the Democratic Republic of Congo in search of Wild animals and these have been seen by the lucky travelers  that have under taken Gorilla trekking safaris in Congo. However, they were allowed to occupy part of the land again.

The best way to have a full Batwa experience is take on a Uganda safari and during your Uganda Gorilla Safari encounter which is guided, there is a demonstration of how to make bamboo cups, hunting styles, collect honey and other activities; A visit to the Garama cave which acted as a refugee camp in the early days of battle against their rivals; Batwa vocational center where they are taught how to make crafts, learn how to farm and other income generating activities. There is also traditional singing and dancing by the Batwa dance group

In Uganda, gazetting of these tropical rain-forests has seen tourism activities boom and mountain gorilla numbers grow, but at a big cost to the Batwa people. Forcefully evicted from their native home without any compensation, they still face struggles to survival.

The Batwa people are thought to be one of the oldest and still surviving people in Central Africa region, were traditionally known as forest dwellers who are still surviving by hunting, gathering and staying in caves, temporary huts made of branches and leaves. If you go for a gorilla trekking safari in Rwanda, you can also be chanced  to see these world`s short people.

Today, the Batwa people are still landless and still struggle to fit into the other local communities around the park. They still earn a living and maintain their cultural beliefs and norms outside of the forest though some have been resettled on the peripherals of the forest and on some islands in Lake Bunyonyi.