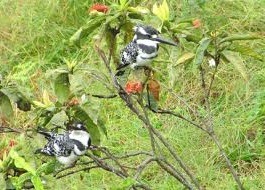 Established in the year 1898, the Entebbe Botanical Gardens are legendary features that sit on the northern shores of the gigantic Lake Victoria which is the largest tropical lake in the world crossed by the equator which is usually encountered by travellers on Uganda safari tours.
The gardens receive 1,626.4 mm of rainfall and they lie at 1,134 m (3,720 ft) above sea-level covering 40.7 hectares. At one time, the gardens had over 2,500 plant species collections which presented an ideal destination for travellers on safaris in Uganda by then before they reduced following a period of instability that characterized the country and are currently under up grading.
The Entebbe Botanical gardens feature plant species from tropical, sub-tropical and temperate zones along with shrubs and other plant species that naturally regenerated over the years. As of 1998, the gardens had 309 species of which 199 were indigenous to Uganda and 122 had medicinal value while 110 were exotic. The gardens receive annual Uganda safari visitors since their rehabilitation in 1998 that count to 40,000.
Apart from plant species, the gardens are a habitat for counts of birds some of which are on the birders’ lists while crafting their safari tours to Uganda. the birds that might be encountered in Entebbe Botanical gardens include; the pink backed pelican, eastern grey plantain eater, yellow billed stork, African open billed stork, glossy ibis, blue cheeked bee-eater, malachite kingfisher, lesser jacana, yellow billed duck, crowned hornbill, long tailed cormorant, common sand piper, green sand piper, wood sand piper, Senegal coucal, pied kingfisher among other birds
Uganda safaris/Uganda safari News
Prime Uganda safaris & Tours Ltd