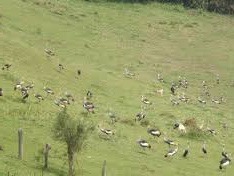 Located on the boundaries of Lake Mburo National Park which is famously encountered while on wildlife safaris in Uganda, the Enyemebwa center is a community establishment that is aimed at conserving the Ankole long horned cattle and its heritage.
The center began with a community generated idea of gathering beautiful Ankole cows from various cattle breeders so as to form one herd that would be communally owned and conserved for the next generations. The idea was motivated by the fact that people were abandoning these species of cows due to their low productivity in terms of milk production which is apparently the main income earner for the cattle keepers in the area. The fate of the beautiful Ankole cows which are considered to have a Chwezi back ground was seen as threatened as many people were selling them at a high rate in favor of exotic breeds especially Friesian for milk production which would not only affect the herniate of Ankole but also reduce on tourist products that are encountered by travellers on safari tours in Uganda.
Apparently, the Enyemebwa center stands as the fulfillment of this idea with its beautiful Ankole long horned cows grazing in the rangelands of Nshaara region along with other wild game like zebras, Impala among others which tend to pull travellers to plan safari holidays to Uganda. Besides cows, the center also features the whole of its heritage including; the Cattle Kraal, the milk pot platform and its components, the traditional soil made watering trough, unique crafts that were used like the brush (Enkuyo) along with other artifacts. The center also features traditional huts and the traditional decorations to reflect the true taste of tradition.
This community initiated project is a manifestation of the community efforts towards conservation of various species that may prove to be threatened for the benefit if the generations to come and the travellers on Uganda safari.
Uganda safaris/Uganda safari News
Prime Uganda safaris & Tours Ltd safari News