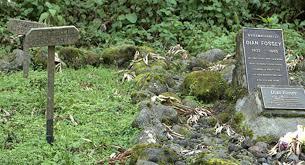 Exploring Dian Fossey Tomb In Volcanoes National Park Rwanda is where Dian Fossey who was a prominent zoologist, as well as a primatologist from America who gave up her life and resources for a period of eighteen years and carrying out wide research about the world endangered species of the mountain gorillas inhabited in the Volcanoes national park in Rwanda, was buried. Exploring the gravesite where this world fallen conservationist was laid to rest after her death is what travelers on their Rwanda safaris should not miss.

With the financial support from Louis and Mary Leakey who were running anthropological research in Africa’s prominent Olduvai Gorge in Tanzania, Dian forged her way through the Democratic Republic of Congo where she first settled her camp at a place called Kabara to begin her Research study about the rare species of the mountain gorillas in the year 1967. This interesting story can be only explored and listened to by travelers who take gorilla trekking safari in Rwanda’s volcano national park where the gravesite of the American researcher is found.

On the month of July 9, 1967, Dian received soldiers who forceful accompanied her plus her research helpers to Rumangabo a place where she was detained for two weeks before she escaped after bribing one of the guards and she found herself in Walter Baumgartel’s Travelers Rest Hotel in southwestern Uganda in Kisoro district. After arresting her escort in Kisoro, Dian took the advice she got from Leakey of not going back to Congo but start-up her research Center in the Rwanda side particularly in the Volcanoes national park. The Research Center was to be called Karisoke after amalgamating the two names of Mount. Karisimbi and Visoke are found in the middle of Volcanoes Park.

In the month of September, the year 1967, The American Researcher Fossey succeeded in establishing the Karisoke Research Center in the middle of the two Virunga volcanoes of Karisimbi and Visoke a round in Ruhengeri village. Dian got challenge after setting up the research Center especially from the poachers who were against the suggestion of the researcher to protect and conserve the mountain gorillas, also the other challenge was that the gorillas in  Rwanda side were not used to human beings unlike those in Congo where the researchers started from, hence she was forced to study the apes at distance.
The pronounced research began anti-poaching campaigns with the help of her staff team who could move in the park rescuing some of the mountain gorillas whose parents were killed by the local poachers. The activities of this lady helped to feed the world with information about the mountain gorillas which were inhabited in the volcanoes national park. This helped to increase mountain gorilla trekking safaris in Rwanda because various people including the researchers and tourists were attracted to visit Rwanda.

Dain Fossey who was dubbed Nyirmachabelli, by the local Rwandan people played a great role in conserving mountain gorillas up to the year 1978 when she was murdered by the local poachers whom she was against their acts of poaching the mountain gorillas. Today her tomb or graveyard lies in Karisoke Center just 30 minutes drive from Volcanoes national park. The tomb deserves to be explored while on your Rwanda gorilla tour & safaris in  Volcanoes National Park.

The one hours trek from Volcanoes park headquarters to Dian Fossey’s Tomb is a rewarding experience that should not be left out by any traveler on Rwanda gorilla trekking safaris to volcanoes. The trek exposes you to unique scenic views of the areas around volcanoes national park. In addition, tourists who spare time to explore the tomb are also exposed to different wildlife species like the species of the forest hogs and forest elephant plus even some primate species.

Sparing time to explore Dian Fossey’s tomb while on your Rwanda gorilla safaris and tours offers memorable intellectual/educative, physical, and emotional experiences. The safari tour to Rwanda’s Volcanoes allows you to learn more about the American Dian Fossey who decided to give her life for the sake of the mountain gorillas. While at Karisoke Research Center, you will have a golden chance to tour the tomb where the conservationist was buried, listen to the experienced guide explain to you the history of the fallen conservationist and also visit the house from where Dian Fossey was mysteriously murdered in 1978.

Dian Fossey tomb tour is an activity that tourists on Rwanda gorilla tours, safaris, vacations or holidays should directly include in their itinerary because it will help them to know the back behind gorilla conservation in Volcanoes national park.
Rwanda Safari Tours/Rwanda Wildlife Safari news by Prime Uganda Safaris and Tours Ltd