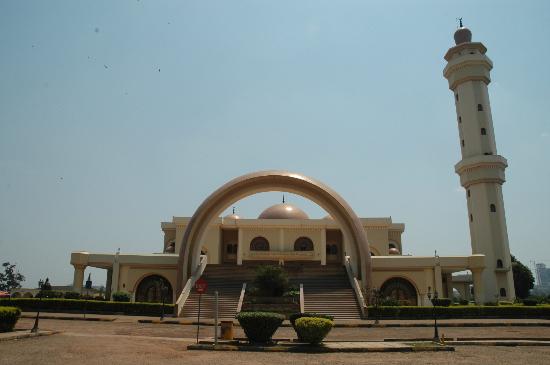 New York has the Statue of Liberty, London has the London Eye, Paris has the Eifel Tower India has the Taj Mahal and Kampala has the Gaddafi National Mosque. Situated on the top of Old Kampala Hill, Gaddafi Mosque is one of the interesting attractions which can be explored by visitors on Uganda safaris to Kampala.
The mosque is the head administrative Center of the Uganda Muslim Supreme Council the organization which takes care of all Islamic affairs in Uganda. It’s a two fabled building and the mosque is on the upper floor while the offices are on the ground floor.
The Construction of the famous mosque began in 1972 after the emergence of the Uganda Muslim Supreme Council by the Government of Uganda. It was then called the Old Kampala National Mosque. Construction came to a standstill in 1976 and it wasn’t until 2001 when the Mufti of Uganda Sheikh Shaban Ramadhan Mubaje, approached the President of the state of Libya Colonel Muammar Gaddafi when he was on his safaris tour to Uganda, asking him for assistance to complete the construction process of the Mosque which Gaddafi accepted. (A mufti is the head of the Muslim community. According to the Islamic dictionary, he is described as a person who presents laws of the scholars to people who ask for them. The word Mufti is derived from the word “fatwa” or opinion and it means ‘one who gives opinions’.)
Ground work began again in 2004 when the old unfinished establishment was demolished. It was officially opened and inaugurated in 2008 by the late Colonel Gaddafi himself who was on Uganda Safaris to attend the event that was attended by several African heads of state.
Gaddafi Mosque can accommodate 35,000 worshipers and the number doubles during the holy month of Ramadhan and on special Islamic days when even some Islamic brothers under take safaris to Uganda. On holidays like Eid when Muslim travelers in Uganda Safaris are flocking to the mosque, it accommodates about 200,000 people.
The popularity of the Mosque is attributed to the late Colonel Gaddafi who left a landmark on international politics so whenever people both locals and foreigners hear that he did such a thing as constructing a National Mosque for Uganda, Safaris to Uganda’s Gaddafi Mosque always increase because many visitors come to witness for themselves if actually it exists”
This minaret which is open for viewing by the general public has a staircase of three hundred and four stairs. It is completely built from reinforced concrete and the view of Kampala City on top of this minaret is breath taking. It is a favored spot by professional photographers and tourists on Safaris tours to Uganda who want to get a scenic view of Kampala City.
Tourists on Uganda gorilla safaris tours are welcome at the Gaddafi Mosque and should dress modestly. Women should wear loose fitting clothes covering to the wrist and ankle and cover their heads. Coverings are available at the reception for those who need them and should be returned after the visit. Men should wear trousers, shirts with sleeves.
There are two parts of the mosque; the ground floor which is open at all times and the first floor which is only opened on special occasions like Eid or weddings. The minaret is always closed but opened on request when accompanied by a guide. Foreigners are charged 10,000 UGX for viewing the inside of the mosque and going up to the minaret with a guide but it’s totally free for Ugandans.
For visitors undertaking safaris in Uganda, Gaddafi national mosque, is one prime spot in Kampala one must not miss. There are well trained guides at the mosque that offer to take you around with a great a smile.
Uganda Safaris /Uganda Safari News
Prime Uganda Safaris &Tours Ltd