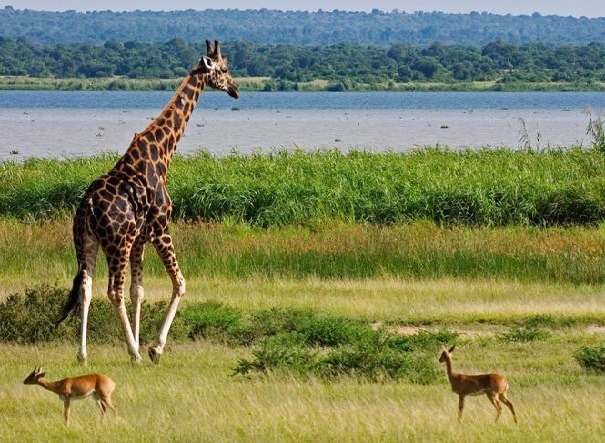 Murchison Falls National Park also dubbed Kabalega National Park is Uganda safari destination covering protected area of 3,840sqaure kilometers.
Perfectly situated in North western corner of Uganda, Murchison Falls was first established in 1926 as a game reserve and later upgraded to Uganda’s first National Park in 1952. It protects wide range of wildlife which attracts many visitors to undertake safaris to Uganda. The park is home to approximately 76 species of mammals and round 451 distinctive species of birds including the rare shoe-bill stock that can be spotted in the delta region and hence this makes it number one destination in Uganda which must be explored by all visitors on Uganda safari tour.
The park is bisected by the Victoria Nile, which thrust 45m over the remnant rift valley wall, creating the world’s most power Murchison Falls, the centerpiece of the park and the final event in an 80km stretch of rapids. The powerful cascade that drains the last of the river’s energy, transforming it into a wide, serene stream that flows slowly across the rift valley floor into Lake Albert can be explored by any traveler on Uganda safari to Murchison falls National Park. This extend of river offers one of Uganda’s most recommendable wild game spectacles. The uncommon wildlife which can be seen along the riverbanks includes elephants as well as giraffes and buffaloes and the permanent wildlife residents which can be enjoyed while on lunch cruise include hippos, Nile crocodiles and aquatic birds.
Murchison Falls Conservation Area consists of Murchison Falls National Park as well as Karuma Falls Wildlife Reserves and Bugungu. All these areas covered by MFCA have diverse vegetation which range from savannah vegetation, woodland riverine forest. The diverse vegetation supports the survival of grazers like elephants, giraffes, hartebeests, oribis, Uganda kobs, chimpanzees, and many bird species which are spectacular to visitors on safari tour to Uganda’s Murchison falls national park.
The park which hosts around 76 mammal species and an estimate of 451 bird species is the only park in Uganda that has the potential to contain all the big five animal species most visited by travelers on Uganda Safari tour. These big five include the Lion (King of the Jungle), Buffalos, African elephants, leopards and these can be easily found in the northern part of the park especially above the Nile. The world endangered white Rhinos that were bit extinguished are now being recovered and protected in the Rhino sanctuary located south of the Murchison Falls National Park.
Uganda Safaris /Uganda Safari News
Prime Uganda Safaris and Tours Ltd