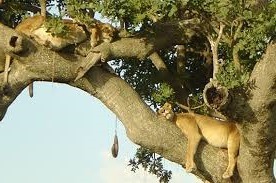 Queen Elizabeth national park is situated in western part of Uganda, the park covers around four main districts in Uganda and among these districts include Bushenyi district to the gifted Kasese district, Rukungiri and Kamwenge. It’s located at an approximated distance of 376 kilometers (234 mi) by road from Uganda’s Capital city Kampala driving on the south western direction. The nearby town of Kasese district is found outside the northeastern corner of the park, where as the town of Bushenyi, is positioned in the southeastern part of the park. The park lies at the approximated coordinates of: 00 12S, 30 00E (Latitude:-0.2000; Longitude: 30.0000).The park is the most tourists destination which is attracting many safaris to Uganda.
The Uganda’s well known Queen Elizabeth National Park was first found in the year 1952 and after two years, it was established into park in the year 1954 and even attained its name after the beautiful Queen Elizabeth II. The recommendable national park in Uganda is the most famous and most loved by tourists on their Uganda safaris due to its remarkable wildlife which includes the elephants, Hippopotami, lions also called King of the Jungle, Leopard as well as the endangered primate species of the Chimpanzees. All these animal species can be viewed easily by any visitor on his or her safaris in Uganda and the experience the visitor gets from setting eyes on all of these remarkable wildlife species is very unique and memorable.
Queen Elizabeth is the second largest protected area in Uganda and it covers an approximated total area land of 1,978 square kilometers which is almost 764 square miles, of the total area occupied by the park, 50% of the park’s land are found in the district of Bushenyi, an approximated total area of 17% in the park is found in Kasese and 33% of the protected area land lies in prominent Rukungiri Districts. Therefore paying visitor this park will enable one to explore all the three districts of Uganda were the park located. The Queen Elizabeth park area stretches from Uganda’s Lake George found in the northeast part of the park to Lake Edward located in the southwest direction, and it also includes the magnificent Kazinga Channel that links the two lakes of Lake George to Lake Edward. The precious opportunity here for the visitor on his Uganda safaris and tours is that he or she can participate in the Kazinga launch cruise which takes the visitor 3hours of memorable experiences because the visitors will have chance to enjoy the views of the Hippos as well as the Crocodiles and various bird species surviving near the two water bodies linked by the channel..
Queen Elizabeth National Park is blessed with diverse ecosystems which is stunning as well as of great interest to travellers on their wildlife safaris to Uganda. The eco-system ranges from savanna vegetation to the shady vegetation, frothy lakes, humid forests with even humid forests and fertile wetlands which make the park the most favorable for the world’s big game as well as ten individual primate species with even the world endangered species of the chimpanzees .The park is said to be habitat to 95 species of mammals and over 600 species of birds. The prominent and the famous Ishasha sector in the Rukungiri side presents unique views of the rare tree climbing lions which make the highlight for many Uganda safaris and tours to this part of Queen Elizabeth national park.
Uganda Safaris /Uganda Safari News
Prime Uganda Safaris and Tours Ltd