Exploring the gorillas of buhoma in bwindi Uganda

Home » Exploring the gorillas of buhoma in bwindi Uganda 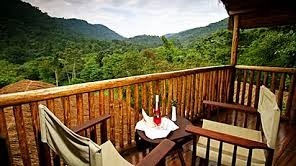 The Buhoma region forms the northern section of Bwindi Impenetrable National Park where gorilla safaris in Uganda are greatly carried out.
Buhoma sector shelters three of the twelve habituated gorilla families that thrive in the entire habitat of Bwindi Impenetrable National Park. The habituated gorilla families are also a section of the greater 400 minimum that thrive in the area making Bwindi the single habitat in the world which has the great count of mountain gorillas.
The significance of Buhoma sector cannot be underestimated considering the fact that the mountain gorillas are world over critically endangered. The Mubare gorilla family the notable gorilla group to receive the first Uganda gorilla safari undertakers in October 1993 is found in Buhoma. The gorilla group still thrives and now features 9 members headed by the Silverback Kanyonyi and has a baby gorilla named Kashundwe.
Besides Mubare, Buhoma also features the Habinyanja gorilla group teeming with 18 members commenced the habituation process in 1997 and by 1999, it had already started receiving the visitors. The initial administration was carried out by Mugurusi who later handed over to Rwansigazi and eventually Makara. It derives the naming from the local word Nyanja which means a pool of water as the group was first sighted near the swamp.
The Buhoma region is indeed gifted. The third gorilla family Rushegura is noted to have disintegrated from Habinyanja under the administration of Mwirima Silverback in 2002 and got its name from the local Ebishegura flora. It features 19 members with the dominant Silverback named Kabukojo.
Exploring these gorillas of Buhoma is far beyond the ordinary. Considering the fact that Buhoma is the pioneer sector in Bwindi to handle the travelers on gorilla safari in Uganda, it features developed facilities most especially the accommodation. The upmarket / Luxury clientele have their expectations settled at Sanctuary Gorilla Forest Camp and Buhoma Lodge not forgetting the Mahogany Springs. The midrange / standard clientele can have their dream settled at Silverback Lodge while the Buhoma Community Rest Camp that is owned and run by the community themselves present an ideal budget / basic accommodation in Buhoma for the Uganda gorilla trekking safari undertakers.
The road connection to Buhoma is considered better than other regions of Bwindi as the area’s terrain is not mountainous like the south that is marked by Kigezi Highlands. Additionally, the gorillas of Buhoma tend to dwell in close range thus relatively not hectic to trek.
The combination of the above makes the gorilla permits of Buhoma to sell highly and tracking Buhoma on your gorilla safari to Uganda requires a far advance booking.