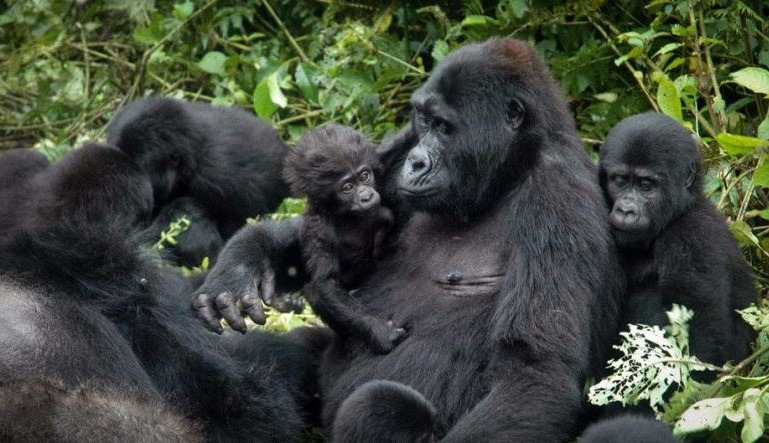 Buhoma region is one of the famous gorilla trekking areas in Bwindi and it’s perfectly located to the northwest part of the park in Kanungu district. The trekking region faces the dark, wonderful, hilly ever green forests of Bwindi. The region is popularly known by the tourists on their gorilla trekking safaris in Uganda today mainly because the region was the first trekking sector to host the first travelers who under took gorilla trekking safaris and tours to Uganda in the year 1993.Since then up to date, the region has continuously been the most favorable sector where one can easily enjoy the views and sights of stunning mountain gorillas in Bwindi.
Trekking gorillas in the Buhoma region is the most recommendable for tourists on their gorilla tours and safaris in Uganda because the well-known region has three important gorilla groups that can be easily trekked by travelers interested in having a wonderful one hour with the human brothers housed in the dark forests of Bwindi. Among the three habituated gorilla groups in Buhoma region involve even the Mubare gorilla group which was the first gorilla group to be habituated and to be trekked by the first tourists in the year 1993.Mubare group at first had eighteen members but it has drastically lost its members and today it has around five remarkable members.
Besides the first habituated gorilla group, tourists to Uganda’s Buhoma trekking sector will also have memorable encounter with the Habinyanja gorilla Group which is among the oldest group to be habituated and received its first trekkers in the year 1999.The pronounced group in Buhoma region offers visitors on gorilla safaris to Uganda an enjoyable time to spend with the seventeen individual members which constitute the whole Habinyanja group.
In addition to the mentioned two groups, tourists on the mountain gorilla tracking tours in Uganda ‘s Buhoma sector can also spend one magical hour with the Rushegura Group that was first habituated in 2000 and today it’s the only group with the largest number of gorillas in the Buhoma region.
After having gorilla experience, one can also participate in cultural encounters by taking community-run ,village walks to the Bakiga as well as home steads of the Batwa people who are the owners of the land occupied by the Bwindi Impenetrable forest. The walk enable visitors on Uganda safaris  to learn the life style of local communities.
Uganda Safaris /Uganda Safari News
Prime Uganda Safaris and Tours Ltd